The 7 Cardinal Sins Of Governor Chime 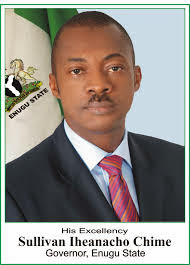 4. Money Laundering: It is not surprising, therefore, that the Enugu State Government and Governor Chime’s Chief of Staff/“Woman Friday”, Mrs. Ifeoma Nwobodo is currently undergoing investigation over charges of laundering multibillion naira funds of the poor people of Enugu State. This followed a petition to the Police IG, detailing that the money laundering and looting started from April 21, 2011. That was just a few days after Governor Sullivan Chime was inaugurated for a second tenure. It is for reasons such as this that we insist that governance stopped in Enugu from May 29, 2011.
We will publish the complete dossier in volume 2 of the Rescue Statement, including the onshore and offshore businesses and real estates.
5. Human Rights Abuse: Enugu State is now the new ugly face of human rights abuse in Nigeria. The detention of Enugu’s First Lady, Mrs. Clara Chime by Governor Chime, which he justified on account of alleged health challenge, has turned the State from a land known for peace and freedom to one of odious repression. Enugu State now holds the loathsome record of the first state to convert its Government House to a Mental Home. What a shame!
6. Poor workers welfare: Despite the mindless lootings going on in the State, the Enugu State’s workforce remains the least paid in the whole country. Any form of industrial action or complaint is met with brute force.
7. Perjury: Contrary to the Oath of Office he swore to, Governor Sullivan Chime lied to the people of the State that he was enjoying an accumulated leave, whereas he was lying seriously ill in overseas hospitals. He deceived the people for 140 days!
Conclusion
We wish to assert that the foregoing are just a tip of the iceberg of the rot and looting that are bleeding Enugu State to death, a mere glimpse of the despotism under which weight our beloved State is sinking. We therefore call on President Goodluck Jonathan, the PDP, the anti-graft and law enforcement agencies, and indeed other well meaning Nigerians to come to our rescue before it is too late.
Ozo Christopher Ogbu
National Coordinator
(For Enugu Rescue Group)