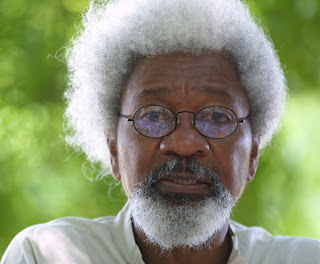 Subscribe to our newsletter
In apparent display of response, Nigeria’s first lady, Patience has responded to remarks which is linked to Nobel Laureate, Wole Soyinka, who had apportioned blame on the first lady for the long political crisis in Rivers State, especially the show of shame at the Rivers House of Assembly on Tuesday
The First Lady, in a statement signed by her media aide, Ayo Osinlu said the Nobel Laureate betrayed the moral duty required of him as respected member of the society.
According Ayo, he said Soyinka’s comment about Patience Jonathan had made him “an embarrassment to his admirers.”
“Unfortunately, Soyinka betrayed moral duty in his recent diatribe against Mrs. Patience Jonathan,” Ms Osinlu said in her statement. “Of course, this would not be the first time he would reach out against the First Lady, usually from self-righteously indignant lecterns.
“In this particular instance, his verdict was that Mrs. Jonathan was ‘stoking the crisis currently rocking her home state of Rivers…’, and thereupon asked Mr. President to caution his wife. The good, old Prof. reminds one of the truth that indeed, most of the giants on the street are men of like passions like everyone else. Worse still, most of them are actually standing on clay feet and would fail the test of a gentle push.”
“Otherwise, who would have believed that the social, civil, constitutional and sundry rights crusader Prof. would maintain a safe distance from the heart of an activity that is a potential threat to the peace, security and safety of the people of a state, then collect exaggerated stories and jaundiced perspectives from familiar propagandists and character assassins, and promptly summon the media to a “state of the nation  address.”

Speaking further Mrs. Patience said; “It’s an embarrassment to his throng of admirers and followers, that a sage of Prof. Soyinka’s status, who used to be a gauge of public morality in this nation, would lend himself to a propaganda of high drive, to save a governor who elected to launch into a river without applicable survival skills.”
Pointing out that Mr. Soyinka’s strategy to attract public sympathy to the “clear underdog” was to attack President Jonathan, and by so doing drag down anyone associated with him, saying the writer was only fuelling the crisis with his claim that she was Governor Amaechi’s problem in Rivers State.
Meanwhile the Presidency, through the Special Adviser to President Jonathan on Political Affairs, Ahmed Gulak, said Soyinka is ignorant as he advised him to be “responsible.”
While speaking to State House Correspondents, Gulak, said it was wrong to drag the name of President Goodluck Jonathan into the crisis as video evidence of incident clearly showed that the governor’s aides were the attackers.
He said further: “Soyinka, without knowing the fact just went public to blame the President and his wife for what is happening in the state. He is an elder statesman, I don’t want to join issues with him but I will say that he should be responsible.”
According to him, “It is mischief to say that the President is behind the crisis in Rivers State. The President cannot be part of the crisis in that state. He is a man of peace. The problem in Rivers State is the internal wrangling of the administration of the governor. It is sad that when there are crises in the assembly, the governor will physically drive to the House of Assembly to partake in the crises.”
“The fact is, in this crisis of Rivers State, the governor should be held responsible because if he did not go physically to the House of Assembly, those guys won’t have been emboldened to be beating people there. Moreso, which his security aides were right inside the chambers, the sacred chambers, which ordinarily nobody is allowed to enter apart from the members.”
“So, I repeat that Amaechi should be held responsible for what happened. He should not drag Jonathan’s name into this matter. Rather, it is the President that is the victim of Amaechi’s mischief plan. He is claiming the state is under siege and that the commissioner of police is against him whereas the CP physically warned him not to go physically into the House of Assembly,” he said