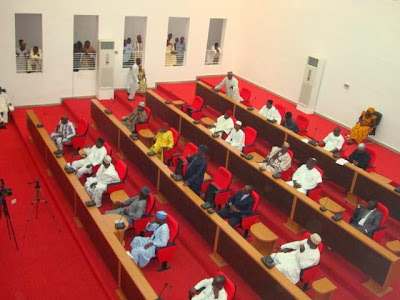 A Civil Society Group known as the Civil Society Network Against Corruption (CSNAC) has stated   that lawmakers in Nasarawa State, receive more money than their equals in other states of the Fedeartion and even the National Assembly,.
In a statement by CSNAC, it said that Nasarawa State of House Assembly members have tried to use absolute deception to avoid its inquiry on how much the lawmakers get.
Subscribe to our newsletter
The statement signed by the CSNAC Chairman Olanrewaju Suraju reads; “In a bid to reaffirm the veracity of information contained in documents previously obtained through other sources, CSNAC, under the Freedom of Information Act, 2011 requested, through the Clerk of Nasarawa State House Assembly, for relevant information and documents on salaries and allowances paid Members of the Assembly between June 2011 and October 2013.”

The group added further that; “in a ludicrous letter dated 9th December 2013 and personally signed by Clerk of the House, crafted to protect the rapacious operations of Assembly and in violation of the FoI Act, the status of a Court was arrogated to the Economic and Financial Crimes Commission (EFCC). The Clerk, ignominiously refused CSNAC request, citing pending investigation of EFCC, as incited by CSNAC, as the basis for this refusal.”
CSNAC rebuked the House Members as it said that; “It beats one’s imagination how such craft ignorance could be ominously displayed by a law-making institution. This artful dodger of House failed to show how the release of requested documents impedes or stampedes the ongoing investigation of the Commission, based on petition of CSNAC on same matter to the EFCC.”
Speaking further it said; “This odious response has no doubt reinforced the tenacity of CSNAC in following this elected-inhumanity-to-electorate to a logical conclusion. All available legal and constitutional means will be explored to ensure transparency, accountability and, protect rights guaranteed under the FoI Act.”