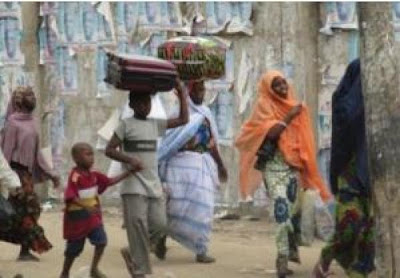 KONDUGA (AFP) – Residents fled the northern Nigerian town of Konduga on Tuesday after suspected Islamists disguised as soldiers shot dead dozens of people in a mosque just before morning prayers.
The massacre in Konduga in the embattled northeastern state of Borno happened early Sunday and has been blamed on the Islamist group Boko Haram, responsible for hundreds of deaths in the region.
A separate attack late Saturday in Ngom village in the nearby Mafa district left 12 people dead, according to local officials. Details have been slow to emerge amid a phone blackout imposed by the military in the area.
Subscribe to our newsletter
An AFP reporter saw residents streaming out of Konduga carrying suitcases on Tuesday, as Borno’s Governor Kashim Shettima visited the town with journalists.
One woman said she was heading with her two daughters to the state capital Maiduguri roughly 30 kilometres (18 miles) away after her husband and son were shot dead in the attack.
“They were killed by Boko Haram in the mosque,” she said, requesting anonymity.
Officials had previously given a death of toll of 44, but local leaders later said that 47 people had been killed.
Zanna Masu Yale, district head in Konduga, said “43 bodies were counted in the morning, but we discovered four more corpses later,” adding that 36 people had been injured.
Resident Babagana Bulama said the gunmen arrived in the town early Sunday morning as people were gathering for morning prayers at a mosque in the Tsohuwar Kasuwa area.
“They came through the western side of our town in convoy of cars. They were in military camouflage,” he said.

Boko Haram has previously worn military uniforms while carrying out attacks.
The attacks at the weekend were believed to be in revenge over citizen vigilante groups forming to help the military battle Boko Haram, which has been waging an insurgency since 2009.
The violence came as Nigeria’s military pursues an offensive in the country’s northeast aimed at ending the insurgency, with a state of emergency declared in the region in May.
The military has encouraged the formation of vigilante groups to help authorities locate and arrest members of Boko Haram. Despite showing some successes, many fear the vigilantes will make matters worse.
Boko Haram’s insurgency has left at least 3,600 people dead since 2009, including killings by the security forces.
The military has claimed major successes with its offensive, but its version of events is difficult to verify with authorities having cut phone lines in many areas and access to remote locations restricted.
Boko Haram has claimed to be fighting for the creation of an Islamic state in Africa’s most populous nation and largest oil producer.
Nigeria’s 160 million population is roughly divided between a mainly Muslim north and predominately Christian south.
Source: Vanguard