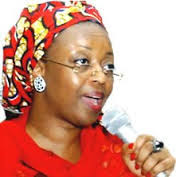 While the Academic Staff Union of Universities, ASUU are on strike for improved working condition, Petroleum Resources Minister, Dieziani Allison-Madueke has spent a whooping N2 Billion in the last two years on Private Jet rentals traveling around the world on both official and personal trips, according to a petition.
The petition currently before the Economic and Financial Crimes Commission, EFCC, alleged that Mrs. Allison-Madueke spends $500, 000, an equivalent of N80 Million on Private Jets rentals in her numerous overseas trip monthly.
The Petition by Crusader For Good Governance signed by Okechukwu Obiora Nnamdi alleged that unlike other cabinet Ministers, the Petroleum Minister rejected a commercial flight and paid $300, 000 for her trip to China when President Goodluck Jonathan visited the Asia country.
Subscribe to our newsletter
According to the Petition, “in the last two years, she has been maintaining a private jet, Challenger 850 Visa Jet at $500,000 per month.”
An Aviation expert told Pointblanknews.com that a one hour trip from Abuja to Lagos cost between $15, 000.00 to $24, 000.00 and $100,000.00 for a seven hour trip on Lear Jets or Challenger 850 Visa Jet.
The petitioners noted, “her frequent trips to meetings of the Organization of Oil Producing and Exporting Countries, OPEC, in Vienna, Austria have been through private Jets.”
“Worse of all, even when Mr. President is traveling and the use of Presidential jet is guaranteed, the Minister of Petroleum never makes use of such cost saving measures. When the President visited China, she was on the trip but travelled in a private Jet at the cost of $300, 000.00”
“The same happened during Mr. President’s trip to South Africa, she also travelled in a private Jet at the cost of $300,000.00.”
The petitioners listed the Petroleum Minister lavish trip that has cost the nation huge amounts of money to include:
• During Easter Break, she flew a private jet to Dubai with members of her family at the cost of $300,000.00
• During President’s visit to South Africa, she flew in a private jet costing $300, 000.00

• NNPC maintains a private Jet Challenger 850 Visa Jet at $500,000.00 monthly for the Minister
• Went to OPEC meeting in Austria also in a Private Jet
• Has never attended any meeting outside the country in a commercial or Presidential  jets in the last two years and has spent over N2 Billion on maintaining aircrafts in the last two years.
• She is the only Minister who attends events when the President is traveling in private jets
• She does official jobs in her house and hardly goes to the office
• Unlike other Ministers, she flies private jets to anywhere even when the president is travelling to the same location
• Information from FAAN, NCAA, NAMA confirmed that she has never flown commercial aircraft in the last two years.
• The President went to China but Madam Petroleum Minister did not go on the Presidential Jet, she went in a private jet, further bleeding the national purse The petitioners urged the EFCC to promptly investigate the allegations as the President may not be aware of “all these atrocious and reckless spending of the Minister.”
They specifically urged the EFCC to investigate all its claims from FAAN, NAMA and NCAA.
Source: Pointblanknews

NGF: Amaechi, Jang May Be Asked To Step Down