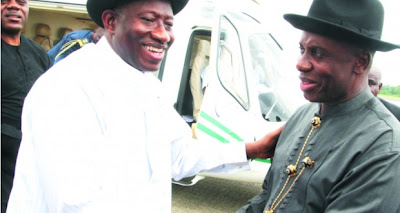 Four days after a peace meeting between President Goodluck Jonathan and some governors who have been up in arms against him, indications have emerged that he (Jonathan) may accept the outcome of the May 24 election of the Nigeria Governors’ Forum (NGF), LEADERSHIP has learnt.
However, the governors have also reportedly made a commitment to the president that the Rivers State governor, Rotimi Amaechi, who won the NGF election would be compelled to apologise to the president.
Subscribe to our newsletter
The apology commitment, LEADERSHIP gathered, was as a result of the strong exceptions President Jonathan took to some disparaging remarks Governor Amaechi personally made against his (Jonathan) person in the course of the debacle.
The president was said to have expressed his displeasure over Amaechi’s utterances to the visiting governors.
The governors who met with the president at the Presidential Villa on Saturday are those of Niger State, Muazu Babangida Aliyu; Kano State, Alhaji Rabiu Kwankwaso; Adamawa State, Murtala Nyako; Sokoto State, Aliyu Wammako; and Jigawa State, Sule Lamido.
The Aso Rock parley which marked a significant leap in the lingering crisis ended with speculations that the governors had demanded from the president the sack of the party’s national chairman, Bamanga Tukur, as well as the recognition of Governor Amaechi as chairman of the NGF.
Although it could not be confirmed if President Jonathan had acquiesced to the demand of the governors to sack Tukur, a top presidency source told LEADERSHIP on condition of anonymity that “one of the demands the president has been worried about is that of the NGF election”.
According to the source, President Jonathan has been put on pressure from “some respectable quarters” on the NGF crisis. He said: “Even before the visit of the governors to the president, there had been some pressure from some respectable quarters in the land concerning the NGF issue.

“It is not as if Mr President was involved in the whole thing called NGF even from the time of its election to the time the governors started having it rough with one another; the players were only dragging in the name of the president for nothing.
“But I think the visit was a good one because, as party members, there is no way we can fight for too long because we all need ourselves; the only thing that baffles me is their demand for the removal of the national chairman; it is a matter of law; the man can’t be removed just like that.
“Of all the demands, the one the president has been worried about is that of the NGF election because it marks a point of departure for our democracy.
“As a democrat who believes in the rule of law, Governor Amaechi’s excesses from all indications may be overlooked so that we all forge ahead because politics is about give and take; after all, it is not the NGF which is a voluntary body that will decide who gets what.”
LEADERSHIP gathered that as part of the concessions being mooted, President Jonathan is to meet his key loyalists after which he would meet with all PDP governors next week.
Apart from debriefing his loyalists, Jonathan, it was gathered, will use the opportunity of today’s meeting to canvass the replacement of Akwa-Ibom State governor, Godswill Akpabio, as Akwa-Ibom State governor, Godswill Akpabio, Akpabio, LEADERSHIP learnt, may be replaced by his Katsina State counterpart, Ibrahim Shehu Shema.
Shema was in the race for the NGF chairmanship before the entry of Bauchi State governor, Isa Yuguda, that eventually led to the adoption of Governor Jang as the consensus candidate of the pro-Jonathan governors.
Source:LEADERSHIP