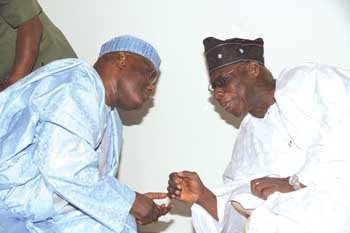 There is confusion in the Presidency over the whereabouts of the registration certificate of the Peoples Democratic Party.
The Independent National Electoral Commission issues certificates of registration to all registered political parties.
But the Presidency, in the battle to secure its hold on the PDP, has sought, without success, for the certificate of registration of the party.
Subscribe to our newsletter
Sources in the Presidency told The Eagle Online that attempts to trace the certificate has been futile.
But sources said the Presidency has narrowed the search for the certificate to three political gladiators within the party.
They are former President Olusegun Obasanjo, former Vice President Atiku Abubakar and the Jigawa State Governor, Alhaji Sule Lamido.
However, the source said it is very unlikely that the certificate will be with Obasanjo as he was still in Yola Prison in Adamawa State when the party was registered.
It was gathered that the belief in the Presidency was that the faction of the PDP that broke away on Saturday owing to complaints about the handling of its Special National Convention, must be banking on possessing the certificate to win the battle for the ownership of the party.
A source said that the decision of President Goodluck Jonathan to pacify the breakaway faction was because of the belief that with the certificate of registration in its possession, winning a court battle would be easy.
Abubakar and Lamido are part of the breakaway faction under the chairmanship of Alhaji Abubakar Kawu Baraje.
Jonathan was said to have been humbled by the fact that without the certificate of registration in his kitty, he was fighting a lost battle against the breakaway faction that has headed to court to stop the recognition of the leadership of the party under Alhaji Bamanga Tukur.
Abubakar, Lamido and some other governors had on Saturday formed the parallel PDP following their outcry of injustice during the Special National Convention.
They said over 50 candidates not favorably disposed to the leadership of Jonathan and Tukur were disqualified at the convention.
Some of the other governors who are with the new PDP include Babangida Aliyu of Niger State, Aliyu Wamakko of Sokoto State, Rotimi Amaechi of Rivers State, Murtala Nyako of Adamawa State and Abdulfatah Ahmed of Kwara State.
The Presidency is said to have come to the conclusion that the certificate is with either Abubakar or Lamido.

However, majority of the members of the think-tank in the Presidency believe the certificate must be with Abubakar.
This was because he paid for the registration of the party and its national headquarters, Wadata Plaza, in Abuja.
He was reported to have spent about N98 million for the certificate and the acquisition of the national headquarters.
A source in the Presidency said: “The President and his team know that they are fighting a lost battle if they do not have the certificate of registration with them.
“It is very obvious that the ambition of the President to seek re-election in 2015 is dead once the party is handed over to the other faction by the court.
“The next thing the president can do is to abandon his ambition and return to his village.
“Or how do you rationalize the President joining another party to realize his ambition.”
One of the sources said that Jonathan is also scared by the possibility of the breakaway faction of the PDP teaming up with other parties to form an alliance against the PDP for the 2015 election, even if the court declares the Tukur-led leadership as the authentic PDP.
The fear is that the breakaway PDP could team up with the Peoples Democratic Movement, in which Abubakar is believed to have a lot of influence.
And the alliance could also be extended to the All Progressives Congress.
A source said: “It is scary thinking of what an alliance of the breakaway PDP with the PDM and the APC would produce.
“It is very unlikely that the PDP would be able to muster enough support to defeat such an alliance.
“That is why it is almost certain that the President would find an amicable resolution of the crisis, even if it involves his having to step down his own reelection ambition and look like a hero in all of the crisis.”
As at press time on Tuesday, Jonathan was still meeting with a caucus loyal to him in the PDP to consider the various options available to him.
Though he has not declared his interest in seeking re-election, the body languages of both Jonathan and his lieutenants point to the fact that he is interested in retaining his seat in 2015.
Source: Eagleonline