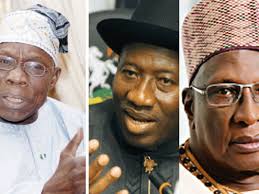 The fire-works expected from the New PDP is being slowed down by the Obasanjo- Atiku feud. The break-up of ruling PDP has been linked to the duo of Obasanjo and Atiku especially within the Villa. This belief led to the suspicion with which presidency viewed the former Obasanjo’s intervention efforts to reconcile the rebel faction with the party.
Having closely monitored events leading to the break-up of PDP from  both the government and rebel camp, it is obvious that President Jonathan is the chief culprit- he allowed Tukur, Anenih, Akpabio, Wike and co to push him to open war fronts where sleeping dogs are better left to lie.  Rivers State Governor, Amaechi, never had this level of followership and sympathy in Nigeria until Jonathan and Wife were drawn into an unnecessary battle with him.  The plot to humiliate Amaechi led to the humiliation of four Northern Governors and the strengthening of the anti-Jonathan elements. While escaping from presidential victimization and humiliation, Amaechi and his group, from informed sources, contacted Babangida and Atiku. Obasanjo has been Amaechi’s ally but Babangida and Atiku were yet to actually place him, but the presidential persecution of brought the three together in defense of the governor and his factions.
The fact that Obasanjo, Babangida and Atiku have suspicion for each other is Goodluck Jonathan’s saving grace. If these three men had buried personal differences and stood dangerously behind the break-away PDP faction, the Tukur led PDP would have scattered to pieces. An Obasanjo- Atiku alliance can scatter PDP. An Obasanjo-Babangida alliance can spell doom for PDP and a Babangida- Atiku alliance can irredeemably fractionalize the ruling party. Whether it is God or Lucifer that stopped them from uniting against Jonathan, only the prophets and seers can explain-however, their disunity is Jonathan’s gain.
The reason why the Jonathan-Tukur alliance is still standing, despite the recent break up of PDP is because Obasanjo is wary of Atiku’s influence over the rebel governors. Obasanjo, from reliable sources, told rebel governors to beware of Atiku and his fabled selfishness. He repeatedly told them to forget the Atiku factor and fight their battles alone, warning that the former Vice President is a spoiler. He also rejected the idea of the governors defecting to either PDM or APC. When one of the governors drew his attention to their contacts with the former vice president, he dismissed Atiku as worse than Jonathan. Obasanjo reportedly lectured them on the dangers of aligning with Atiku but whether his governor students believed his lectures or not is a subject for another day.

Jonathan ,Tukur and his old PDP co travellers should thank God that the suspicion between these three men wedged their unity and co-operation in the effort to tear PDP out of their  hands because if they had united, the president would have to sacrifice a lot, including treasured political alliances to save his 2015 ambitions.
There is wide belief within the Villa that Obasanjo personally co-ordinated the humiliation of Jonathan at Eagles square. This is far from the truth. Obasanjo was merely informed of the new twist of events which he was not comfortable with. The original intention sanctioned by Obasanjo was that the rebel governors should mobilize for the convention and if they get rigged out, they should hold a press conference, condemn the charade and put the entire exercise into credibility crisis with an option of going to court. However, the entrance of another determined war horse, Atiku, changed the face of the exercise. Atiku was more in support of the formation of a New PDP than taking the Old PDP to court. He believed that the courts as presently constituted cannot guarantee speedy justice.
Obasanjo was rattled when he was informed that his arch-enemy, Atiku, had staged a walkout at Eagles square with his boys, forming a new PDP in the process. He had to hurriedly initiate reconciliation before Atiku uses his enormous goodwill to convert the break-away PDP to PDM.  Obasanjo never liked the idea of New PDP. He had reportedly told the governors never to abandon the party to people referred to as new comers for another party. Therefore, the attempt by Obasanjo to intervene quickly in the PDP crisis was to ensure that Atiku does not lead his boys astray.
While Chief Elephant Obasanjo and Elephant Atiku are fighting, Baby Elephant Jonathan will most likely coast to another PDP primary victory and a probable 2015 re-election. Obasanjo is so blinded by his hatred for Atiku that he turns against any political moves of his erstwhile Vice President.
The truth Obasanjo does not know is that Jonathan and his kitchen cabinet are no more comfortable with him. They are wisely soft pedaling with the G-7 Governors, caving in to some demands and buying time in order not to swell the camp of the opposition.  Their strategy is to engage the rebel governors till they run out of steam, curry them back to the party, and deal with their perceived sponsors. There is a group within the villa which includes Anenih, Tukur, Gana, Anyim, Clarke etc. who are bent on drowning Obasanjo politically immediately the crisis is over.  This group will soon be enlarged to include Nnamani, Masari, Na-Abba, Alamaeseigha and all anti-Obasanjo elements.
While Obasanjo is trying to ensure that the G-7 group is not led astray by Atiku, the Jonathan men have mapped out plans to shut him out of PDP. Obasanjo’s obsession with frustrating every Atiku political move will soon be his greatest undoing. It has promised to be an interesting political puzzle as fury takes over common sense and if Obasanjo is not careful, he will find himself in the same situation which made Atiku to escape from PDP to ACN in 2006.