Omeruo Off To M’brough, Set For Championship Switch 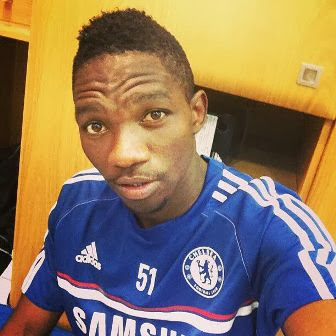 Kenneth Omeruo is expected to visit Middlesbrough this weekend with a view to going there on loan from Chelsea till season’s end.
A top source close to the Nigeria international defender told MTNFootball.com: “Kenneth is about 85% set to join Middlesbrough on loan from Chelsea, but first he has to go there and see things for himself before he accepts the move.”
‘Boro are 15th on the 24-team English Championship with 30 points from 24 matches.
The 20-year-old Omeruo has been training with the Chelsea first team, but he knows he has to start playing regularly if he is to make the final cut to the 2014 World Cup in Brazil.

Nigeria coach Stephen Keshi has reportedly said the player will move on loan this month so as to stand a chance of featuring at the World Cup.
Chelsea and Middlesbrough have a good relationship, sources further informed, and this added to the relationship between the two managers, Jose Mourinho and Aitor Karanka.
“Karanka has assisted Mourinho previously and Chelsea are willing to let Kenneth go there because he will be guaranteed playing time,” another source said.
A shoulder injury which needed surgery denied Omeruo a chance to be part of Chelsea’s pre-season training and this is widely believed to have affected his chances of breaking into the first team at ‘The Blues’.
Source: Completesports

Students Run Away From Schools For Fear Of COVID-19 Vaccine