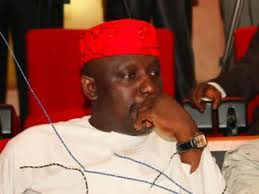 For Governor Rochas Okorocha 5th March, 2014 would have been a bad day for him, following a situation that saw some disaffected political body guards of the Governor invaded the State Executive Council Meeting, where they also interrupted the events of the day.

According to universalreporters findings, the irritated and furious gang due to their recognized faces within the Imo State Government House premises made their way without any problem as there no much security checking on them, a scenario that also deceived the security operatives who thought they were at the government House on the orders of the governor for usual government official protocol.
According to a government House source, upon making their way to the Government House, the next place they moved in was the Hall of the State Executive Council and there and then they barricaded the hall, where they ordered that they will see the governor with immediate effect or there will chaos inside the hall.
A government House source who spoke to universalreporters said the men are alleged to be the people the Governor used as his body guards during his campaign days and even up till when he was ushered into the government house Owerri.
“They were even promised automatic employment as soon the governor wins the election. Though after the election the governor kept to his words as they were giving jobs as Security Operatives to help keep peace in different locations of Owerri town the Imo State City Center,” the source said.
The source however said; “hell was let loose when these men saw that they are leaving from hand to mouth for more than 16 months, as their salaries has not been paid, having felt that the governor has reneged on his promise to them, they decided to demand for their 16 months payment by force, and failure to pay the money by the governor, trouble will ensue.”
Not knowing was happening, the Governor on hearing the hues and cries outside the made his way to see what is happening, but he was quickly barricaded by these angry looking men who demanded that their payments be made to them, as they vowed never to leave the government house until their monies are paid to them.
According to this medium finding, as a result of the breach of security, the governor there and then postponed the inauguration of the new appointees which was scheduled to take place that day, and later it was gathered that he left for Abuja for the APC even that was held on Thursday.
He also directed his Chief of Staff and the Principal Secretary to take of the situation at hand.

PDP Is A Terrorist Organisation By Dr. Peregrino Brimah

Do Not Give Loan To Gov. Nyako And His Government, Adamawa Group Warns Nigerian Banks