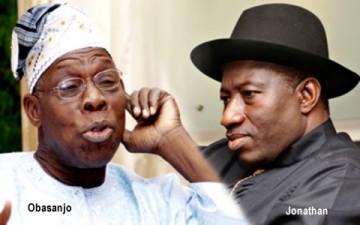 Former President Olusegun Obasanjo has accused President Goodluck Jonathan of ineptitude and of taking actions calculated at destroying the country.
Subscribe to our newsletter
In a 18-page letter to President Jonathan, obtained by Premium Times, Obasanjo said, “Nigeria is bleeding and the hemorrhage must be stopped.”
The letter noted that Jonathan had failed to deliver on his promises to the Nigerian people, to stem corruption, promote national unity and strengthen national security.
Obasanjo observed that President Jonathan had betrayed the mandate of the Nigerian people who voted him to power, and had, instead, been pursuing selfish, personal and political interests based on advice he received from unpatriotic aides.
Obasanjo, wrote that Jonathan had become terribly divisive and clannish, destroying his own party, polarising the country along regional and religious lines and ridiculing Nigeria in the comity of nations.
“It would be unfair to continue to level full blames on the Chairman (Tukur) for all that goes wrong with the party,” Mr. Obasanjo said. “The chairman is playing the tune dictated by the paymaster (Jonathan). But the paymaster is acting for a definitive purpose for which deceit and deception seem to be the major ingredients.

“Up till two months ago, Mr. President, you told me that you have not told anybody that you would contest in 2015. I quickly pointed out to you that the signs and the measures on the ground do not tally with your statement. You said the same to one other person who shared his observation with me. And only a fool would believe that statement you made to me judging by what is going on. I must say it is not ingenious. You may wish to pursue a more credible and more honorable path.”
Obasanjo continued,  “For you to allow yourself to be “possessed”, so to say, to the exclusion of most of the rest of Nigerians as an “Ijaw man” is a mistake that should never have been allowed to happen. Yes, you have to be born in one part of Nigeria to be Nigerian if not naturalized but the Nigerian President must be above ethnic factionalism. And those who prop you up as of, and for ‘Ijaw nation’ are not your friends genuinely, not friends of Nigeria nor friends of ‘Ijaw nation’ they tout about.
“To allow or tacitly encourage people of ‘Ijaw nation’ to throw insults on other Nigerians from other parts of the country and threaten fire and brimstone to protect your interest as an Ijaw man is myopic and your not openly quieting them is even more unfortunate.
Obasanjo also asked the National Assembly to rise up and take decisive action over the recent allegation in the country that the Nigerian National Petroleum Corporation, NNPC,  failed to remit billions of dollars in proceeds of crude oil sales to the federation account.
“This allegation will not fly away by non-action, cover-up, denial or bribing possible investigators,” Mr. Obasanjo told the President. “Please deal with this allegation transparently and let the truth be known.
“The dramatis personae in this allegation and who they are working for will one day be public knowledge. Those who know are watching if the National Assembly will not be accomplice in the heinous crime and naked grand corruption. May God grant you the grace for at least one effective corrective action against high corruption which seems to stink all around you in your government.”

Hassan Adamu, Babayo Sheu, 5 Others In Contention To Replace Tukur