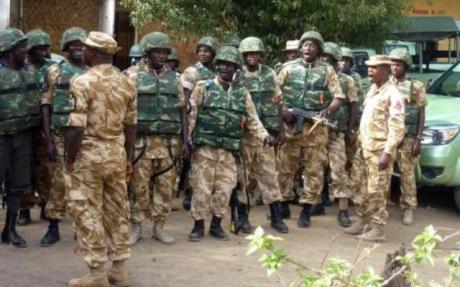 At least 9 soldiers were feared killed in a deadly ambush by gunmen suspected to be members of the dreaded Boko Haram sect, in the border areas of Izhe in Madagali Local Government of Adamawa state.
Confirming the incident, chairman of Madagali, Mr Maina Ularamu, who  could not ascertain the number of casualty said that the soldiers were on a mission to repel an attack.
Subscribe to our newsletter
”The soldiers were going to repel a planned attack at Izhe border village when they were ambushed by the heavily armed insurgents.
”As I am talking to you, most villagers at the border areas have since fled to Madagali the administrative headquarters for fear of possible attacks.

” We are calling on the government to station  more troops with armoured tanks. These Boko Haram insurgents have more sophisticated weapons than the soldiers,” said,Ularamu the council chairman.
He said that the insurgents were well armed with anti-aircraft and anti-tank weapons mounted on their vehicles.
It was learnt that the troops battled the heavily armed insurgents, who attacked from different directions.
Efforts to get the Brigade  Commander of the 23rd Armourd Brigade,Yola, Brigadier General Rogers Nicholas  proved abortive as he was said to have gone on a special assignment
Source: Vanguard