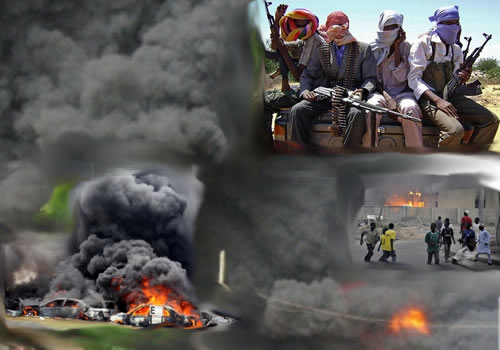 On  January 27, 2000, that is, in the early days of the current democratic dispensation, a sitting state governor, now a Senator of the Federal Republic, who had allegedly received indoctrination in one of the training camps of Osama bin Laden, the late al-Qaeda leader, in Sudan, introduced the Islamic Sharia law in the governance of his state. Of course that singular event set the ball rolling in the northern part of the country where the people are predominantly Muslims, as state governors fell over one another to establish Sharia law in their states to secure their ‘imperial thrones’.
This brought all manners of religious preachers to the scene. Even if they were there before, the new regime of Sharia law was like a catalyst that invigorated them to go all out to win followers. As a bait to win more disciples, they introduced what is now derisively known as “stomach infrastructure”. This means attending to the needy constituted by the poor and those in the lower rung of the social ladder who were in need of the basic necessities of life – food, clothing and shelter. And because of the pervasive poverty in this part of the country, people came flocking in, in their hundreds and thousands. A time bomb was gathering.
Subscribe to our newsletter
The time bomb exploded in July 2009, five years ago, when Mohammed Yusuf, who founded the Islamist group, now popularly known and called Boko Haram, meaning “Western education is a sin”, in 2002 and his group of disciples engaged the Nigeria security forces in a bloody confrontation in Maiduguri, capital of Borno State, Northeast Nigeria. The group’s official name is “Jama’atu Ahlis Sunna Lidda’awati wal-Jihad”, which in Arabic means “People Committed to the Propagation of the Prophet’s Teachings and Jihad”. Yusuf was killed on July 30, 2009, exactly five years ago today, in that sectarian violence. Since then, thousands of lives and property running into billions of Naira have been consumed by the orgy of killings and arson which has virtually enveloped the three states of Adamawa, Borno and Yobe in the northeast of the country. Also, the violence has led to collateral damages in human and material resources in the contiguous states of Bauchi, Gombe, Kaduna and Kano as well as Abuja, the seat of government, and other places.
A recent report released by the Bath, a United Kingdom, UK- based group said, while the global average in terrorists’ attacks is two deaths per attack, Nigeria, Africa’s biggest economy, suffers from the world’s deadliest terror attacks, with an average of 24 deaths per incident out of 146 recorded between January and June. During this period, it said, Nigeria recorded 3,477 deaths as violence by Boko Haram grew in scale and sophistication. According to the report, the latest figures represent a doubling of the 1,735 deaths recorded in the previous year through June 2013.
In spite of promises by the federal government that the Boko Haram’s mindless killings and large-scale destruction of properties in the country will soon be a thing of the past, recent happenings indicate that the menace is far from being over. Perhaps, a better way to put it is that it is waxing stronger. While the whole world agonises over the forced abduction and continued incarceration of more than 200 innocent schoolgirls since April 15, 2014, by the Boko Haram terrorists, villages in the Northeast are still daily being overrun and pillaged by the bandits. Their activities are not limited to the Northeast alone as they make regular incursions to other northern states like Bauchi, Kaduna, Kano and others. Even Abuja is not immune from their rapacious killings and destructions.
Only last week, the terrorists hit both Kaduna and Kano causing panic all over the place. There were twin explosions in Kaduna. The first explosion was targeted at Dahiru Bauchi, a popular Islamic cleric, while the second was targeted at Maj. Gen. Muhammadu Buhari, a former Head of State and leader of the opposition political party, the All Peoples Congress, APC. Bauchi had just delivered a Ramadan lecture (tafsir) at the Murtala Square, Kaduna and was driving through the busy Alkali Road in the city centre when his attacker struck. Similarly, a suicide bomber hauled explosives at the convoy of the former Head of State near the 1 Mechanised Division of the Nigerian Army in the Kawo area of Kaduna. The Toyota Prado conveying him and one of the cars in the convoy were hit. Though scores of people were injured and several cars were damaged in the two incidents, both Buhari and Bauchi escaped unhurt.
/////////////////////////////