Lagos-Ibadan Expressway And The Churches By Joe Igbokwe 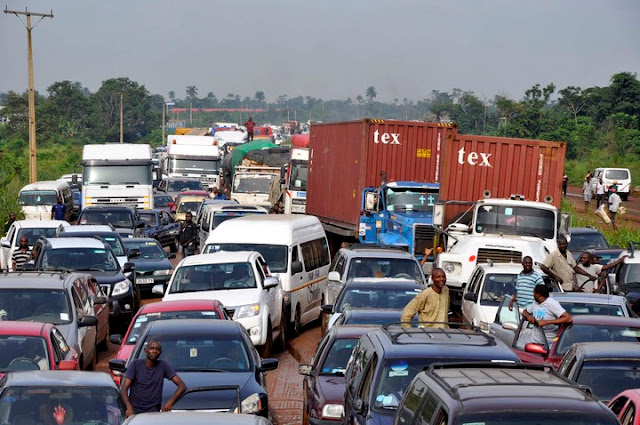 An urgent pressing matter in my home town, Nnewi in Anambra State compelled me to travel on Friday August 9 2013, afternoon after an engagement in Lagos. As I was about leaving the house around 1pm one of my brothers reminded me that the Redeemed Christian Church will be starting their monthly Holy Ghost Service and advised that I should find an alternative route by avoiding Lagos-Ibadan expressway. And because I did not know the state of Lekki-Epe-Ijebu Ode Road and Lagos-Ikorodu-Shagamu axis I decided to brave it to use Lagos-Ibadan expressway. What else can one do in a country where good roads has become an unachievable target?
Subscribe to our newsletter
Immediately I passed the old toll gate near 7up Bottling Company the crisis started. To get to the famous Julius Berger Bus Stop to make enquiries from any of the drivers coming into Lagos of what the situation was like took me almost an hour. I eventually got to Berger and crossed to the other side to get information on the traffic situation. The driver I met told me that I have two traffic situations to contend with along that corridor. One from the old toll gate to Mountain of Fire Praying Ground, and then another on approaching the Redeemed Camp. I was frightened and I looked at my watch and it was few minutes after two o clock. It took me another 30 minutes to get to a place I will make a U-Turn in front of OPIC Plaza. I headed to Ikorodu-Shagamu Road. Because of the traffic on Lagos-Ibadan expressway many motorists also took Ikorodu-Shagamu-Benin expressway. That was where my trouble started. With heavy traffic on a very bad road (from Ikorodu to Shagamu) you can imagine my predicament. To cut the whole story short I got to Shagamu around 4.30pm. I got to Nnewi around 10.30pm. A journey that would have taken me five hours on a good day took me ten long hours of pains and agonies. I was exposed to many dangers associated with Shagamu-Asaba expressway. I have gone and come back but yet to forget the troubles and dangers we expose ourselves everyday in Nigeria simply because someone fails to do his or her work or that someone is taking impunity to another level.
Millions of Nigerians have suffered untold hardships and pains since the early 90s when Churches started relocating to Lagos-Ibadan expressway. The late General AbduKareem Adisa once drove to the Redeemed Camp to complain that the Church must find a way to address this man-made problem but all to no avail. More than 20 years after the visit, Churches, companies, schools, universities etc have been relocating to Lagos-Ibadan expressway in droves. This is a road that was built in 1974 and it has remained same for 40years. A road suffering untold pressure from heavy traffic that it has become crate ridden and a death trap, yet pentecoastal chruches struggle to add to the pressure of the road by relocating to the road. What is the motive for this predilection to be sited on the Expressway?

The purpose of this write up is to once again share my experience with Nigerians and to try to prick the conscience of worship centres on Lagos-Ibadan road. Do they feel for the commuters on that road? Do they know about their predicaments? Do they worry about the sufferings and pains? Are their actions fair to all concerned? Has there been any practical step to stem the tide? Has it reduced the pains, loss of man hours, loss of money, wear and tear on the vehicles? Is it not a sin for us to create big problems for others because we must God in a particular place? Is God not everywhere? When will this problem be nipped in the bud? I suggest that all the Churches and Mosques should stop the activities on Lagos-Ibadan expressway and allow branches to do it in-house until Julius Berger finishes expanding that road. Even after that these institutions need to show practically how they intend to manage traffic if the events must continue.
20years, even after the late General Adisa’s intervention on Lagos-Ibadan expressway, nobody has looked into the matter and called for solution. We cannot just continue to live like this. We must do something. We must not continue to bemoan problems but must have the political will and courage to address the frontally. The ball is in the court of our leaders.

More Than 100 Killed In Tribal Conflict In South Darfur