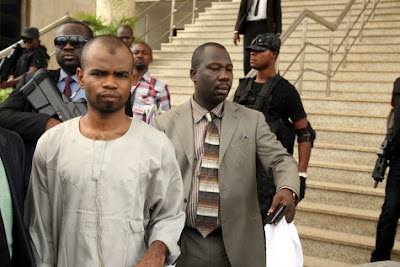 The Boko Haram kingpin, Kabiru Umar, alias Kabiru Sokoto, was on Friday sentenced to life imprisonment by an Abuja Federal High Court for his role in terrorist activities, including the December 25, 2011 bombing of St. Theresa’s Catholic Church in Madalla, Niger State.
He was the governor of Sokoto State in the hierarchy of the Boko Haram group, according to evidence that emerged in the course of his trial, which lasted six months.
Subscribe to our newsletter
Justice Adeniyi Ademola found him guilty of facilitating terrorist activities in Sokoto State, and having prior knowledge of the bomb attack at St. Theresa’s Catholic Church.
Kabiru Sokoto, who was finally apprehended by operatives of the State Security Service in the Borno State Governor’s Lodge in Abuja after escaping from the custody of police officers who initially arrested him, was arraigned by the Federal Government on April 19, 2013 on a two count charge bordering on terrorism.
In count one of the charge, the Federal Government informed the court that, between 2007 and 2012, the Boko Haram kingpin facilitated bomb attacks on the police headquarters in Sokoto State and some other government organisations in the state, an offence contrary to section 15(2) of Economic and Financial Crimes Commission (Establishment) Act 2004.
In count two, he was accused of having prior information of the bombing of St. Theresa’s Catholic Church but refused to disclose such to law enforcement officers, an offence contrary to section 7(1) of Terrorism and Prevention Act 2011.
Following Kabiru Sokoto’s claim that he does not understand English language, the trial had to be conducted with the aid of an interpreter, who translated exchanges in Hausa and English languages.
But evidence emerged in the course of the proceedings that the Boko Haram kingpin actually understood English language, having obtained four credits in the Senior School Certificate Examination which he wrote in English.
At a point in the trial, Kabiru Sokoto openly disagreed with the interpreter over the interpretation given to a statement he made in Hausa Language.
Kabiru Sokoto had denied the two-count charge during his arraignment, with his lawyers claiming that he was tortured before he made the confessional statement tendered as evidence by the prosecution, in which he owned up to the crimes.
The defence counsel, led by Adamu Ibrahim, also argued that the prosecuting counsel, Mrs. Chioma Onuegbu, did not prove the allegations made against the suspect.
Six prosecution witnesses, who testified against Kabiru Sokoto, insisted that he was guilty of the charge brought against him.
In the testimony he gave in his own defence, Kabiru Sokoto insisted on his innocence.
However, delivering judgment in the matter on Friday, Justice Ademola held that Sokoto’s confessional statement, in which he owned up to the crimes, was factual evidence.
“This court classifies the confessional statement as freely and voluntarily made by the accused person as recorded by the witness,” Justice Ademola said.
He went ahead to quote portions of the statement in which Kabiru Sokoto admitted his role in facilitating terrorist activities in Kano.
In the statement, Kabiru Sokoto had said, “Here in Abaji (a satellite town in the Federal Capital Territory) nobody knows that I am a Boko Haram member. I have about 500 children that I teach as an Islamic instructor.
“Some of my members are in Mabira, Sokoto. I planted them to bomb the police headquarters in Sokoto and I purchased four AK 47 rifles with about 2000 live ammunition.”
Continuing, Justice Ademola noted that the statement was also corroborated by the account of one of the Boko Haram members arrested in Sokoto State, who informed SSS investigators that they were planted by Kabiru Sokoto, “who is the governor of Sokoto State in the hierarchy of Boko Haram.”
“This court finds as a fact that the accused person (SKabiru okoto) was the mastermind of the terrorist act in Mabira, Sokot State,” Justice Ademola said.

Sokoto was quoted to have said in the statement that “The Madalla (St. Theresa’s Catholic Church) bombing was carried out by one Bashir Mohammed and other persons who I cannot remember or know their name but if their leader Suleiman is arrested, he will shed more light on the incident because I was not directly involved.”
Justice Ademola held that Kabiru Sokoto lied when he disowned the confessional statement attributed to him.
He noted that Sokoto’s false claim that he does not understand English was an indication of the fact that he lied to the court.
“This court finds that the accused person was economical with the truth right from the beginning of this trial when he claimed that he does not understand English language.
“A prosecution witness confirmed the accused person’s knowledge of English, as well as obtaining four credits in SSCE – and he wrote his examinations in English language.
“The accused person is not a credible witness; he is a pathological liar who has no respect for the truth.”
Concluding, the judge added, “The prosecution has proved it case and this court finds him guilty beyond reasonable doubt. Accordingly the accused person is as guilty as charged.”
Interestingly, just as Justice Ademola was about to pronounce sentence on Sokoto, his lawyers begged the judge to “temper justice with mercy” because the convict has aged parents, a wife and two kids to take care of.
The defence counsel equally urged the judge to have mercy on Sokoto because he has not had the opportunity to see his family since he was incarcerated about two years ago.
But Justice Ademola stressed that Kabiru Sokoto does not deserve mercy, having failed to show any form of remorse throughout the trial.
The judge also condemned Kabiru Sokoto’s claim that he does not understand English, a development which made the trial cumbersome as an interpreter had to translate every statement made in the course of the proceedings.
“If he can take us for six months translating when he actually understands, then you will understand what I am talking about,” the judge said, adding that the crime was even more condemnable because it occurred on a Christmas Day.
He therefore sentenced Kabiru Sokoto to life imprisonment on count one of the charge, in line with the provisions of section 15(2) of EFCC (Establishment) Act 2004, and 10 years imprisonment on count two, as stipulated by section 7(1) of Terrorism and Prevention Act, 2011.
Justice Ademola ordered that the two sentences will run consecutively, which meant that Kabiru Sokoto will serve the life sentence first, before serving the 10 years prison term.
The judge in the same vein urged the security agencies to investigate the circumstances surrounding Kabiru Sokoto’s arrest in the Borno State Governor’s Lodge in Asokoro, Abuja.
According to Justice Ademola, “The police are yet to investigate the circumstances surrounding the arrest of the accused person in the Borno State Governor’s Lodge in Abuja – the seat of power.
“The members of the organisation (Boko Haram) have permeated all levels of government, the police have a duty to investigate and bring other persons involved to book.
“It is imperative that security forces finish off this investigation so that we can get to the root of this.”
The judgment held amid tight security at the Abuja FHC, and immediately after the proceedings, heavily armed SSS operatives whisked Kabiru Sokoto off to prison.
Source: Punch