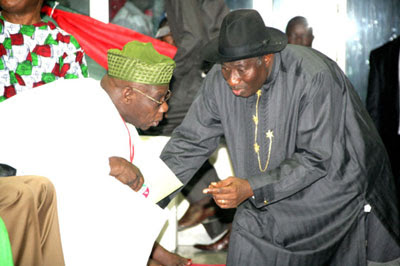 President Goodluck Jonathan on Saturday held a closed door meeting with former President Olusegun Obasanjo in the latter’s residence in Abeokuta, Ogun State.
The visit comes amidst reports that some Peoples Democratic Party governors, led by Governor Godswill Akpabio, are making moves to settle any misunderstanding between Messrs Jonathan and Obasanjo before campaign activities for 2015 commence.
Subscribe to our newsletter
Mr. Obasanjo was a major backer of the president in 2011, but is believed to be opposed to any re-election plans for Mr. Jonathan, preferring to support a Northern candidate rumoured to be Governor Sule Lamido of Jigawa. The former president boycotted the widely publicised presentation of Mr. Jonathan’s mid-term report in May, preferring instead to attend a function by the Jigawa governor on the same day.
Dressed in a black flowing agbada and a Yoruba cap to match, President Jonathan arrived Mr. Obasanjo’s residence at about 12 p.m. in the company of Senator Grace Bent. He met with the ex-president for about one and a half hours before proceeding to the Ashero Estate residence of his spokesman, Reuben Abati, who concluded the burial of his mother on Friday.
Mr. Jonathan, who arrived Lagos on Friday for the commissioning of a 200-unit Idinmu Police Housing Estate named after him, had flown to Lome, Togo, for a meeting of leaders of the Economic Community of West African States (ECOWAS); before returning to Lagos same day for meetings with unnamed groups and to pass the night.
Fielding questions from journalists at Mr. Abati’s residence, Mr. Jonathan said his primary role in Abeokuta was to condole with the Abati’s, but he could not visit Abeokuta without paying a visit to Mr. Obasanjo.

“It is true we saw President Obasanjo in his house because we came here to Abeokuta to commiserate with Abati who buried his mother yesterday. And knowing that Abati’s house is at the backyard of Obasanjo’s house, it will not be good if we come and not visit him.
“Even the man himself will not be happy if we don’t visit him. I am like a son to Obasanjo,” he said.
The President remarked that he had planned to attend the Church Service after the commission of the housing estate on Friday but was unable to do so because there was the need for him to fly out to Togo to meet the President of Côte d’Ivoire, Allasane Quattara, and his Togolese counterpart, on important state matters.
He condoled with the family of Mr. Abati, whom he described as a member of his family; and advised the siblings to take solace in the fact that their mother lived beyond the biblical three score and ten.
In his remarks, Mr. Abati, who noted that the family did not expect the President since he had previously been represented by his Chief of Staff, Mike Ogiadomhe, at the burial service, expressed delight at Mr. Jonathan’s visit.
The presidential spokesman said he was happy with the life his mother lived as not many mothers would die and get their burial attended by the nation’s present.
Source: Premium Times

Sen. Ahmed Sani Yariman Lambasts Critics Says I Can Give Out My Daughter At The Age Of 6 For Marriage