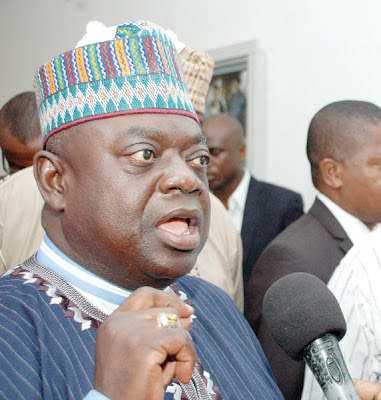 In what looks like an inch towards reconciliation, President Goodluck Jonathan and aggrieved governors of the ruling Peoples Democratic Party (PDP), otherwise known as  G-7 governors, yesterday rose from a meeting at the presidential villa with a fresh road-map for peace.
The renewed indications of rapprochement notwithstanding, the president and all the aggrieved governors are expected to reconvene to firm up the new deal of reconciliation after the Muslim Hajj and Christian pilgrimages.
Subscribe to our newsletter
The G-7 governors present at yesterday’s meeting with the president at the first lady’s wing of Aso Rock were: Muazu Babangida Aliyu (Niger), Rotimi Amaechi (Rivers), Rabiu Kwankwanso (Kano) and Ahmed Abdulfatah (Kwara).
Aliyu Wamakko (Sokoto), Sule Lamido (Jigawa) and Murtala Nyako (Adamawa) were absent as they are out of the country on Hajj.
Others PDP governors who attended the meeting include; Godswill Akpabio (Akwa Ibom), Liyel Imoke (Cross River), Idris Wada (Kogi) , Ibrahim Shema (Katsina). Vice President Namadi Sambo and PDP BoT chairman, Chief Tony Anenih were also at the meeting.
Governors Aliyu and Imoke who read the communiqué after the meeting said, while it was cordial, the meeting agreed to take steps that would help them implement the resolutions reached in the previous meeting which are aimed at resolving the impasse.
Aliyu said, “Sequel to the meeting held on the 15th of September and in line with the agreements reached at the meeting, the governors met with the president, vice president and the chairman of the board of trustees, with apologies from the governors of Jigawa, Sokoto and Adamawa, who had travelled for the Hajj.
“The meeting which was cordial resolved that in spite of the unfortunate events that arose after the meeting of 15th of September, the parties remain committed to the resolution of the differences.

The meeting agreed to continue to take steps towards implementing the resolutions agreed to at the previous meetings. In view of the above some of the governors it was resolved that the meetings be reconvened shortly after the Muslim hajj and Christian pilgrimages are concluded”.
The presidency had indicated on Sunday that it was going ahead with the meeting billed to hold yesterday as agreed in their last meeting on September 15, 2013. Special adviser to the president on political affairs, Alhaji Ahmed Gulak who told Journalists yesterday that although the Presidency read news of the statement by the nPDP in the media, it was yet to be officially informed maintained that the Presidency would not act on media speculations.
Jonathan, the president and the G7 governors had announced after the September 15 meeting that after resolving to sheath their swords, they all agreed to meet again yesterday to mull the way forward.
But the national chairman of the nPDP Abubakar Baraje in a statement last week, noted that it had written to the president requesting a postponement of the meeting.
But before the president met with the governors, he had a brief one with the Kano State governor, Rabiu Musa Kwankwaso.
Dressed in a white babariga and his trade mark red cap to match, Governor Kwankwaso arrived at the presidential villa at about 11:15am. About four minutes after Kwankwaso walked into President Jonathan’s office, Akwa Ibom State Governor and chairman of PDP Governors Forum, Godswill Akpabio also arrived.
Details of the meeting between President Jonathan and the Kano state governor were sketchy as at press time.
Source: Leadership