I Didn’t Detain My Wife-Governor Chime 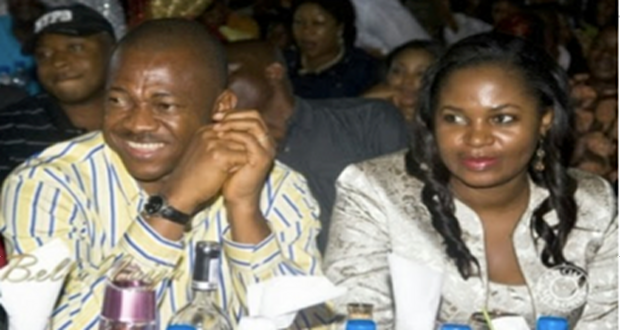 Enugu State Governor yesterday said he didn’t subject his wife, Clara to house arrest. The governor who also vowed to protect his wife integrity while addressing journalists on the issue before the presence of  Clara and her elder brother, Mr. Tony Igwe said; “Well, my wife has some medical challenges and it would be very unkind for me to talk about her condition on the pages of newspapers. I have done everything to protect her integrity and I’m not now going to expose her to ridicule because some people want to exploit her situation to drag me into a needless war of words.”
Subscribe to our newsletter
“We’ve been battling this (Clara’s health challenges) prior to my inauguration in 2011. It was so bad at a time that she had to be taken out of here (Governor’s Lodge) for treatment. When she stabilised, I pleaded with her doctors for her to be brought back here to be receiving her treatment at home and they graciously accepted.”
Chime said; “There was a time she was confined indoors and that was strictly on her doctors’ advice. She’s here and she can confirm or deny it. Also, the doctors then advised against allowing her access to   telephones and laptop. “I cannot say or do anything to undermine her dignity. She is, first and foremost, my wife. The big blunder I committed was allowing her access to the telephone and her laptop, against the advice of her doctor. I’m paying dearly for that today, going by what is happening now.
“Her brother is here, her doctor is here with us too. You people (journalists) can confirm anything you want from them, either here and at your convenience. Would I have been a better husband if I asked her to leave the lodge because of her medical challenges? Would it not have been more convenient for me if I allowed her to stay and be treated in the hospital,” the governor said.
According to the governor he said; “But like I said earlier, I wanted the best for her and that’s why I pleaded with the doctors to have her treated at home. That is also why I allowed her access to her telephone and laptop, which unfortunately led to the stage where I’m now being falsely accused of imprisoning or detaining my own wife.”

However, when it was the turn for her wife to speak, it took her long before she spoke. Speaking she said she has not met Falana or even engaged him to  seek legal redress for her.
However, she said wrote a letter to her doctor, Dr. Agumuo and another doctor overseas who she was introduced to and wondered how the letter leaked to the public, as she also admitted that she was once confined to a room without access to her telephone and laptop. She said, “That was when I had a serious crisis.”
According to Chime’s wife she said; she has the key to her room and controls her entry and exit, contrary to the claim in the petition that she had been locked up for asking to be allowed to leave.
According to her she said her grumble was that she had not been allowed to leave the premises. “Though I attended mass last Sunday,” she said.
Meanwhile Chime said; “All I want to reassure you is that she is safe here. Her confinement within the premises for now is at the instance of her doctor who is here.”

The PDP Government Has Institutionalised Corruption In Nigeria –Says Buhari