On the surface, Major Hamza Al-Mustapha, arguably the most powerful and influential Major in the history of Nigerian Army and perhaps amongst the array of gifted and intelligent officers the army has had in history, is a happy family man, with a ‘caring, dedicated and reliable wife’, one who has remained connected and committed to his extended family, friends and associates and one that cannot be easily manipulated by a fellow human being and less expected, a woman.
Beyond what Nigerians generally know on the surface about the once powerful Chief Security Officer (CSO) to late General Sani Abacha, Al-Mustapha’s life as an army officer, during his incarceration and even now after he was released from prison, is a life of many self inflicted tragedies and one that requires the prayers and possible intervention of all those that love him before it is too late, before he is wholly consumed by the very person that always claims to love him even more than his own parents; the person directly responsible for the frustrations and eventual death of his parents. That person is his own ‘wife’, Hafsat Al-Mustapha.
Readers will certainly be surprised by the time they are finally through with this piece. They will probably be convinced that the summary of this piece is a contribution from a credible and reliable insider that freely offered to contribute in the hope that Al-Mustapha, a fine and unassuming gentle man will be finally rescued by our collective prayers. It is also an attempt to alert Nigerians that contrary to the general notion craftily fueled and created by Al-Mustapha’s ‘wife’, the likes of Obasanjo’s, Gen. Abdulsalami, Maryam Abacha etc are not the real enemies of the Nguru born army officer and are indeed not the actual threats to his life and career but his ‘wife’, Hajia Hafsat. This will indeed sound unbelievable and ridiculous to many particularly some of us that are privy to the intrigues behind the persecution and incarceration of Al-Mustapha. Gen. Abdulsalami is on the surface instrumental but what actually brought about the crisis between the former head of state and several other generals with Al-Mustapha? Hafsat.
To many of us insiders Al-Mustapha, for reasons that have to do with the unfaithfulness, greed and the over ambition of Hafsat, has been practically possessed and hypnotized by her and as a result he is disconnected and separated from virtually all those that are not 100 percent loyal to her including his father and mother and even his biological brothers and sisters, close friends that are regarded by Hafsat as potential threats that will undermine her insatiable desire to perpetually possess him and expose her many years of evil.
The offense of Al-Mustapha’s late parents before Hafsat is for vehemently rejecting his proposed marriage to her when he was 26 years old as a lieutenant in the Nigeria Army. They had valid and justifiable reasons for rejecting Hafsat. Her history speaks for itself. She was eleven years older than the young Al-Mustapha and a mistress to some of his senior officers who are now retired army generals. Besides her immoral life in the barracks where she met Al-Mustapha and which made his parent to reject her, Hafsat was dismissed from Queen Amina College Kaduna in 1967 when the authorities of the school discovered she was pregnant. She was then in form 4 now SS1. After her dismissal from Queen Amina College, Hafsat went to Lagos and stayed with the owner of her pregnancy, one Gaya. Gaya, who is now late, is a Christian and for the purpose of convincing Gaya to accept the unborn child and marry her she converted to Christianity. But Gaya rejected the bastard child when she finally gave birth to a boy in 1968. Hafsat had no other choice out of frustration than to relocate from Lagos to the North again. She named the bastard child who happens to be my childhood friend, Jamilu. Jamilu is today 46 years old, precisely 8 years younger than her self acclaimed husband, Major Al-Mustapha who is now 54 years old. Till date it is on record that Hafsat has resisted every effort by her child, Jamilu, to know his biological father while Al-Mustapha, who is almost his age, was forced by her to shoulder and accept all the responsibilities of Jamilu as a foster father. Hafsat is facing the challenge of disclosing the real father of her 46 years old son, Jamilu, and to provide evidences if she indeed got the child through wedlock. Because of her consistent failure to tell him his real father Jamilu has fought with his mother several times. At a time Jamilu became very disturb and frustrated because even during childhood some of us are in the habit of calling him a bastard child because we didn’t grow to know his father. Out of frustration and because of the immoral life style of his mother, Jamilu became very stubborn and a drug addict and has continued to remained so up to his present age. He is also not happy and fought with his mother several times because of the manner she is treating and possessing Al-Mustapha. Jamilu knows virtually everything the mother is doing to dictate the tune in Al-Mustapha’s life. He even threatened to expose her and tell Al-Mustapha the dirty secrets he knows about his mother’s acts of infidelity and romance with sorcerers. When Hafsat became convinced that her 46 years old son knows so much and may expose her, and typical of her attitude of finding every means of getting rid of anybody that becomes a threat she sent Jamilu packing from her house. As at this moment Jamilu has decided to leave the country because of the unending scandals he used to hear about his mother and he promised never to come back until his own mother is death. Jamilu who is now in the United States can confirm or deny my claim. I know he will read this piece anywhere he is in the world. 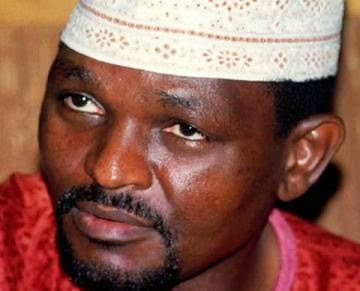 Eggon militants Collected N171, 000 ransom, But Are Yet To Release Our Son–Relative to Missing SSS Operative By Rabiu Omaku,Lafia

Police Not Against Peaceful Assemblies…