Emperor Jonathan: My Person Of The Year By Bayo Oluwasanmi 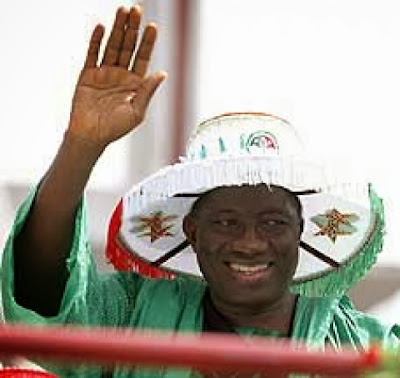 Yoruba proverb says “Oruko nroni,” which literally means your life is shaped by your name. As President Goodluck Ebele Jonathan name suggests, he has a habit of being in the right place at the right time. Apart from his first name which means good fortune, the middle name Ebele is equally propitious. Ebele means God’s wish.
Born in 1957 in the oil-rich Niger Delta region, Mr. Jonathan is a Christian from Ijaw ethnic group. He came from a family whose trade was canoe-making. He studied zoology at the University of Port Harcourt. He worked as an education inspector, lecturer, and environmental protection officer before going into politics in 1998.
Subscribe to our newsletter
Just as his rapid rise to power in the federal government owed a lot to luck, so too did his promotion to a state governor. He was elected as deputy on the ticket of Governor Dipreye Alamieyeseigha of Bayelsa in 1999. While serving his term though without distinction as deputy governor, in what would be a providential turn; Alamieyeseigha was impeached on corruption charges. Mr. Jonathan took over as governor and two years later he was handpicked by President Obasanjo to run on the PDP ticket with Yar’Adua. The demise of Yar’Adua turbocharged his ascent to the presidency. Mr. Jonathan assumed the presidency May 6, 2010.
In choosing Mr. Jonathan as my Person of the Year, I rely on Time Magazine’s definition of the Person of the Year. Time defines its Person of the Year “as the individual who, for better or worse, had the greatest impact on the news and our lives this year.”
Mr. Jonathan has re-written our political history. He’s the first minority to be elected President of Nigeria. He’s the first PH.D to hold the office. He’s the first president associated with Fedora Hat. More than all these, he’s the president Nigerians hoped would at least begin the reconstruction of Nigeria in some areas in the real sense of the world. Charles de Gaulle once said: “History does not teach fatalism … People get the history they deserve.” And Mr. Jonathan would get the history he deserves.
There are so many runners-up in Nigeria for my Person of the Year, I believe no one person or event appropriately fits the definition more than Mr. Jonathan. For good five months, ASUU dominated the news for the shutdown of the country’s entire university system. The 160 million dumb Nigerians remain subservient, intimidated, and immobilized in the face of tyranny.
The inmates of the National Asylum a.k.a. Senators and Reps of the National Assembly sponsored many earthquake shaking bills that confirmed their dumbness and numbness of the reality of the Nigerian situation. The Gospel Comedians are on top of their games. The EFCC still finds it impossible to at least bark to scare away thieves. The economy is stuttering along the obituary column of economies of failed states of Third World nations. We’re still in perpetual darkness. The taps still run dry – as ever. The roads are forgotten priority. The hospitals have finally assumed the status of hospices. The lives of Nigerians now worth only two sparrows. The times in our nation’s history couldn’t be worse.
When he assumed office, Mr. Jonathan cited anti-corruption, power, and electoral reforms as priorities of his administration. He stated that he came to office under a “very sad and unusual circumstances.” However, since he moved to Aso Rock, Mr. Jonathan has put in place policies and programs for re-engineering corruption and for re-inventing the structural causes of poverty. As a dapper and contended member of the corrupt ruling class, he has transposed his support, approval, and more importantly his active involvement in corruption into comedy of all times.
Mr. Jonathan is well known for his profligacy and he serves as a shining light for his cabinet and others to imitate. Corruption is Nigeria’s existential problem and threat to our corporate entity. Mr. Jonathan’s contrary assertion on the extent of corruption has never been confirmed by the facts. The biting paradox of his corruption infested administration is fueled in part by his lack of vigilance, for being absentminded, for forgetfulness, and for recognized incompetence.
He lacks a talent for empathy and for engaging people in intelligent conversation. He remains a divisive figure for his party and for the nation. He’s widely regarded as a politician without a political base and more of a follower than a leader.
Mr. Jonathan’s three-year presidency is everything that is most disappointing. Nigeria is identified with him all that is wretched and dispiriting – brutally unequal, violent, and corrupt –  landmarks of his tenure. The Jonathan administration is an intentionally overripe comedy about corruption, duplicity, lawlessness, incompetence, and series of unbelievable astonishments.
His administration has been mangled and bungled by chains of overt lapses and covert lopsidedness. Lately, he’s been weakened by oil disputes, OBJ’s attack, civil war within the PDP  and CBN’s question of lack of accounting for $50 billion in oil revenue.
Not only does Mr. Jonathan lacks the elementary knowledge and workings of democracy, he also displays absolute arrogance. He thought himself as a god and demands that Nigerians see him the same way. As president, he wields great power but little character or wisdom.

How a leader deals with the circumstances of life tells you many things about his character. Crisis doesn’t’ necessarily make character, but it certainly does reveal it. Adversity is a crossroads that makes a person choose one of two paths: character or compromise. Any time a leader chooses character, he becomes stronger even if that choice brings negative consequences.  Remember how he responds to some of the challenges he faced: the Boko Haram terrorists, the petroleum subsidy saga, the Governor’s Forum crisis, the ASUU debacle, the Oduah gate, Governor Amaechi and River State affair, the rebel PDP governors, his “I don’t give a damn” answer when asked to declare his assets, etc.
Mr. Jonathan’s administration is laced with series of cruelty. All one needs to verify the truth is take a trip across the country. The federal presence – might, money, and responsibilities are not felt. With violence, crime, and poverty impacting so many of our young people across the nation like never before, Mr. Jonathan has turned blind eyes and  deaf ears to the problems he was elected to solve.
One of his greatest failure is making use of old politics with the same old players and expect a different result. Only a madman would keep trying the same old failed formula. Political leadership isn’t all that complex, it simply requires a willingness to take responsibility.
Nigerians are living in tough times. And everybody you meet is fighting a battle and Mr. Jonathan is searching for a bandage. Born into poor family “without shoes,” he’s a member of a rejected minority ethnic group. Grew up in obscurity in a little town that was mentioned only in scorn, Mr. Jonathan failed to learn more from his defeats than from his victories.
Emperor Jonathan won the award for my Person of the Year based on being a witness against himself: for aiding and abetting corruption, for being a spendthrift manager of our resources, for his arrogance of “I don’t give a damn” attitude to the cries of the suffering poor, for creating a whole new mess and mockery of a democratic system due to his spineless refusal to lead, for his confused priorities, for his impure motives, and for his damaging leadership that has lost him the trust of many common Nigerians.
I have been a reader of biographies for many years, and I have yet to find a successful president whose administration is free from problems and difficulties. Here were people who did not complain or threatened to sue the media. They accepted the difficulties of their office and used them as stepping-stones to leave behind a rich and poignant legacy which we still romanticize and fantasize today.
In the remaining term of his administration, Mr. Jonathan should represent a strong leader willing to accept the consequences of his choices and learn from his mistakes. He must show remarkable wisdom and insight as well as a heart receptive to truth. Sheer use of force, intimidation, harassment, and manipulation would rather sink than save his presidency.
[email protected]

Sorry, But This APC Is Not Change! By Adekoya Boladale