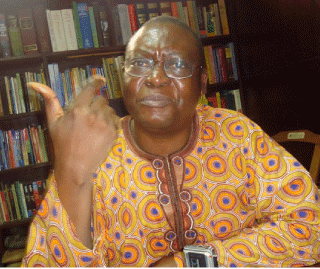 Following Nasir El-Rufai verbal attack on President Goodluck Jonathan over the weekend, a chieftain of the Peoples Democratic Party and governorship aspirant of the Party in Ekiti State, Prince Adedayo Adeyeye, has responded to the outburst of El-Rufai as he said the ex-minister’s desperation for APC Presidential ticket is getting him crazy.
Responding Prince Adeyeye in statement signed by the Director General of his campaign organisation, Prince Adedayo Adeyeye Movement (PAAM), Hon. Bisi Kolawole, said; “From all indications, it appears that El-Rufai’s desperation will soon drive him to the level that he will begin to abuse God.”
Subscribe to our newsletter
Adding further he said; “The other time, he went amok with blasphemous statement against Jesus Christ saying; ‘If Jesus criticizes Jonathan’s government, Maku, Abati or Okupe will say that he slept with Mary Magdalene.”

“Here is a man who was not ashamed to ridicule our leader, former President Olusegun Obasanjo, in his book; ‘The Accidental Public Servant.’ To El-Rufai, Obasanjo was the best national leader only when he served his (El-Rufai) interests. The moment Obasanjo ceased to serve El-Rufai’s interests, he (Obasanjo) became, in El-Rufai’s views, ‘disgusting’ and a counterfeit born-again Christian who consistently puts ‘his personal interest before that of the nation.”
“Now, El-Rufai is all out, singing despicable songs against President Jonathan, Vice President Namadi Sambo, the entire PDP leadership and also disparaging the entire Ijaw Nation just because he desperately desire the presidential ticket of the All Progressives Congress (APC). However, while revelling in attacking and abusing others, El-Rufai has continued to play the ostrich to the despicable way he grabbed the lands he forcefully took from others through the authority of his office as the FCT Minister and share same to his wives and children, who join the league of his privileged friends and cronnies to become multi-millionaires at the expense of the poor masses whose home were demolished and turned to vagabonds; he added.
Speaking further Adeyeye said; “What about El-Rufai’s indictment by the Nigerian Senate for misappropriating over N32 billion out of the proceeds from the sale of federal government properties in Abuja? Can El-Rufai tell Nigerians how these lands were allocated? Plot 3379 Asokoro 2411.7sqm allocated to Hadiza Isma El-Rufai, Plot 3376 Asokoro 2218.55sqm allocated to Asia Ahmad El-Rufai, Plot 3861 Asokoro 2410.36sqm allocated to Ali Rufai, Plot 3027 Asokoro 2139.31sqm allocated to Sani Ahmad Gwadu, Plot 3677 Maitama 2006.55sqm allocated to Ibrahim El-Rufai, Plot 1381 Wuse 11 allocated to Bashir El-Rufai, Plot 871 Jabi 1562.80sqm allocated to Binta Ahmad El-Rufai, Plot 1417 Kubwa 629.23sqm allocated to Hadiza Isma El-Rufai and Plot 4062 Bwari 455.79sqm allocated to Tijani Ahmad El-Rufai.
“It is our position in PAAM that this man called El-Rufai should face the task of polishing his battered image over his handling of the FCT affairs because obviously, telling brazen lies and abusing the president and top PDP leaders will not help him and the earlier he his made to realise this, the better for him,” he said.