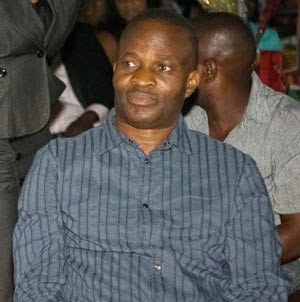 Subscribe to our newsletter
The Gale of impeachment which has been on the country yesterday saw the Enugu State House Assembly, Tuesday morning commenced impeachment proceeding against the state Deputy Governor, Chief Sunday Onyebuchi.  As gathered the House members accused the Deputy Governor of gross misconduct and disobedience to the lawful directives of the governor.
The said impeachment notice was signed by 22 members of the House at their meeting with Governor Sullivan Chime held at the Governor’s Lodge, Monday evening, as allegations levelled against the Deputy Governor included running of poultry farm inside his official residence which had been undergoing reconstruction since mid 2012 but has long been abandoned and his alleged refusal to represent the governor at two official functions in Enugu and Onitsha.
The South-East chapter of the All Progressives Congress, APC, has expressed outrage over the impeachment notice served on the Deputy Governor of Enugu State, Sunday Onyebuchi, by the State House of Assembly.
Meanwhile in statement by the APC South East Spokes person, Osita Okechukwu, said on a closer look, the allegations listed against Mr. Onyebuchi were flimsy. They included disobedience of the directive prohibiting the maintenance of commercial livestock in residential quarters and disobedience of lawful directive to represent the governor, Sullivan Chime in the South-East Governors Forum and the flag-off of second Niger Bridge.
“Whereas, we are not holding brief for Chief Onyebuchi, the APC South-East is of the candid view that the items listed are flimsy allegations. Therefore, we appeal to the House to withdraw the flimsy petitions forthwith. We are making this appeal not only for the sustenance of our fledgling democracy, but in the collective interest of the good people of Enugu State, a peaceful citizenry that may not wish to return to the dark insecure days of the Peoples Democratic Party (PDP) leadership in the state,” Okechukwu said .
Stating that it was taking a cue from the letter written by a former Head of State, Muhammadu Buhari, to President Goodluck Jonathan, the APC said, “Whether Governor Sullivan Chime is behind the impeachment or the utilisation of desperate tactics to suffocate Chief Sunday Onyebuchi, the Deputy Governor, he cannot pretend not to know since it is happening under his watch.”

The party called on the governor to call the House to order so as to maintain the harmonious and peaceful atmosphere in Enugu.
Also a non-governmental organisation, Human Rights Writers Association of Nigeria, HURIWA, has also expressed worry about the adverse effects the gale of impeachment and attempted impeachment of state governors is generating across the country. It called on the Nigerian political class to declare a general period of national truce.
HURIWA, in a statement jointly by its National Coordinator, Emmanuel Onwubiko, and the National Media Affairs Director, Zainab Yusuf, called on the national party leaders and strategic national political stakeholders to convoke a self-funded national political peace conference to sign a memorandum of understanding on the enforcement of the national period of peace, quiet and tranquillity to be moderated by the Independent National Electoral Commission, INEC.
The group also asked the Presidency to direct his retinue of aides to desist from issuing messages that only create further disunity and polarisation of Nigerians along political divides.
“Presidential aides must not turn their offices to partisan war fronts since they are called to offer national service to the Fatherland through the office of the President of all Nigerians elected by the electorate that cut across all party affiliations,” it said. “It is unthinkable that politicians are apparently chasing after rats even while the Nigerian house is on fire. This attitude is satanic and reprehensible because if nothing concrete is done to join forces with the current Federal Government to wage result-oriented battle against the armed Islamic insurgents, then soon we may not have a country to call our own.”
HURIWA also called on INEC to immediately call to order, with a threat of sanction, the national spokespersons of the PDP and the APC and compel them to stop making seditious statements capable of truncating the current democratic atmosphere in the country.
It added, “INEC must act fast and be decisive in ensuring that political parties registered under the Nigerian constitution are not converted to weapons of generating national disunity and war among the different segments and fault lines inherent in the Nigerian state.
“INEC must save the Nigerian democracy from collapsing under the heavy fire power of hate messages that are spewing out from the offices of the national publicity secretaries of both the Peoples Democratic Party and the opposition All Progressives Congress.
“The office of the National Security Adviser to the President should also be concerned about the ugly turn of hate messages that are churned out by the two leading political parties of Nigeria because these divisive and emotional sentiments are clear and present danger to Nigeria’s national security.”