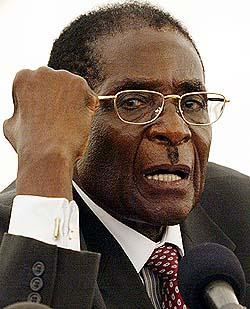 Subscribe to our newsletter
President Robert Mugabe on Friday threatened to jail gay and lesbian couples who fail to conceive any offspring as he launched his party’s campaign for this month’s general election.
The Zanu PF leader also attacked bitter rival and coalition partner Morgan Tsvangirai for his bed-hopping habits saying it was inconceivable that such a character could want to lead the country.
Mugabe, a rabid critic of homosexuality returned to the theme as he addressed thousands of supporters in Harare’s Highfield township.
He said he was shocked to learn that US President Barack Obama had called on African countries to embrace the practice.
The Zanu PF leader said in Shona: “Ndakanzva Obama achiti ah, dai muno muAfrica mabvuma kuti murume nemurume vachate, mukadzi nemukadzi vachate, ndikati nhai nhai, taitoti baba vako zvaari mutema, iwe uneruva neruzivo netsika dzevatema waakunotora zvevarungu futi!
Apparently joking Mugabe added added: “So how would they (gay couples) have children?
“I should like to shut them-up in some room and see if they get pregnant; if they don’t then its jail because they have claimed they can have children. So, to that kind of rot, we say no, no, no, no!”

He dared lesbians who assume the role of the husband in their relationships to prove that they were indeed ‘men’.
“Women are also engaged in this vile activity. We have some claiming to be men but what is it that makes you a man?
“Show us your manhood; you want to make other women your wives and you the husband? Well, that is madness; we refuse to accept that,” he said.
And in, an apparent reference to the late President Canaan Banana, the Zanu PF leader said his government once jailed “vakuru vepamusorosoro” for forcing himself on other men.
He also singled out Tsvangirai for strong criticism over his alleged bed-hopping and warned voters against electing, as President, a man of questionable moral standing.
Tsvangirai has faced accusations of serial dating, illegitimate children and bigamy.
His wedding to wife Elizabeth Macheka, last year, faced a few hitches after it emerged the MDC-T leader was customarily married to another woman while a South African lover also approached the courts to stop the intended nuptials.
Source: – AfricVilla