Atiku And 2015 Polls: Anatomy Of A Smear Campaign By: Senior Fyneface 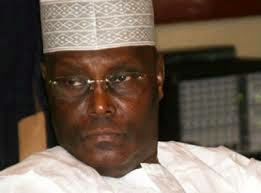 Believe it or not, most times, assumptions have turned out to be tragically misleading and as said by Caleb Colton, The greatest friend of truth is time, her greatest enemy is prejudice, and her constant companion is humility.
Now that the 2015 electioneering campaigns are covertly heating up, politicians would not stop at anything to throw darts at perceived strong opponents or power blocs. The advertorial Open Letter To The American University Of Nigeria, Yolaâ€ signed by a faceless and hitherto unknown group, Citizens Cultural Renaissance Initiative, on Wednesday, July 9, could at best be described as a deliberate mischief as it smacked an outright smear campaign in its obfuscation of facts and context.
The crux of the matter was a statement credited to the former vice president, Atiku Abubakar, by Thisday newspaper of December 15, 2010 that quoted him as haven reiterated John F. Kenedy warning to the American state that Those who make peaceful revolution impossible will make violent revolution inevitable.
Like President Kennedy’s 1962 message, Atiku Abubakar’s 2010 message was about the strong and wealthy not oppressing the poor and weak.  The Nigerian strong were not to trample the electoral will of the Nigerian weak and poor- that was Atiku’s message and it was plain enough.
Today, Atiku Abubakar is still watchful over the wellbeing of the weak and oppressed. The American University of Nigeria, Yola, which he founded in 2006, is taking the lead in trying to ensure peace to some of the impoverished and embattled areas that have suffered terribly from the Boko Haram insurgency.
Interestingly, when the former American president made the statement in 1962, Atiku Abubakar was a village secondary school student. So how come that in 2010, when Atiku as a principal player in the Nigerian presidential election at the time, borrowed President Kenned’s statement to convey a warning against rigging, he is now being credited as the originator of the statement to justify him being tagged a violent man and sponsor of all kinds of things? Was the statement his in the first instance?
The Adamawa Peace Initiative (API) was launched in 2012 by AUN and local community leaders.  API consists of religious, academic and community leaders in Yola and other parts of Adawama State, who are committed to living in peace and harmony. With programs aimed at fostering peace through education, IT training and entrepreneurship, empowerment and community development, this partnership brings the academic leaders of AUN and the religious and community leaders of API together to create a unified peace and reconciliation strategy that has had a broad impact.
While there is still a long way to go, AUN and API have demonstrated that even in the most difficult circumstances, community development, robust communication, and empowerment programs can work, and do work. Yola has escaped the violence plaguing much of the region.
This locally developed peace initiative can be replicated in other parts of Nigeria especially as we are currently grappling with the menace of the book haram terrorist.  That is Atiku Abubakar  dream. It is, therefore, unfounded and uninformed of any group to accuse Atiku Abubakar of making comments intended to incite the polity to violence.
(SENIOR FYNEFACE: 11 Elelewon Street, GRA II, Port Harcourt)

Why Regime Change In Adamawa State Is Necessary By Umar Ardo, Ph.D

Rivers PDP Has Itself To Blame – Rivers APC