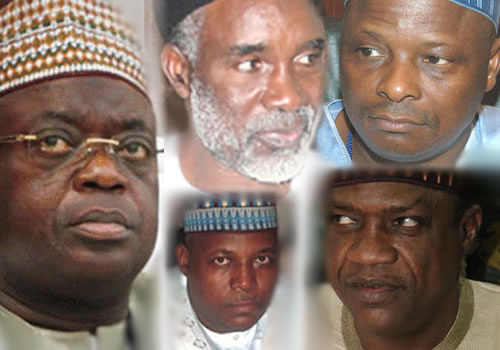 President Goodluck Jonathan, three northern governors and the leadership of the National Assembly yesterday met in Aso Rock to find ways to end the raging crises in the Peoples’ Democratic Party (PDP) and the Nigeria Governors’ Forum (NGF).
Sources close to the governors at the parley claimed that the peace meeting was brokered by the Senate President David Mark.
Subscribe to our newsletter
The governors who attended the meeting are Babangida Aliyu of Niger State, Murtala Nyako of Adamawa State and Sule Lamido of Jigawa State. Mark and the deputy speaker of the House of Representatives, Emeka Ihedioha, LEADERSHIP Sunday learnt, also attended the meeting.
But Speaker of the House of Representatives, Aminu Tambuwal and Governor Rabiu Kwankwaso were absent at the peace talks, as they were in Lagos to receive the Zik Leadership Awards.
It was gathered that issues bordering on the recent moves by the five northern governors which saw them visiting former Nigerian leaders as well as their Rivers State counterpart, Rotimi Amaechi, over what they called “efforts to save the ruling party and democracy” dominated the session.
LEADERSHIP Sunday further learnt that the governors insisted that for peace to return to the party, its national chairman, Alhaji Bamanga Tukur “must go.”
According to one of the sources, the governors maintained that “Tukur is the problem and should leave for peace to return to the ruling party,” adding that the governors assured the president that they would not leave the PDP for another party.
It could however not be established last night whether President Jonathan accepted the governors’ demand.
Our correspondent gathered that the meeting also faulted the utterances of Governor Nyako, especially his recent remark that the “PDP will soon die.”
LEADERSHIP Sunday also learnt that the president and other stakeholders expressed concern at the growing opposition from within the PDP and appealed to its members for restraint.
The governors’ arrival at the villa took aides and other political appointees of the president by surprise. They came a few minutes to noon and headed straight to meet with President Jonathan for about three hours.
None of the governors spoke with reporters after the meeting. Journalists were barred from covering the meeting described as “private”.
The meeting took place two days after the Senate adopted its committee’s report on the Rivers State crisis, which recommended a takeover of the functions of the Rivers State House of Assembly by the National Assembly.

Four of the five governors had, last week, visited former President Olusegun Obasanjo in Abeokuta, a visit which coincided with a similar one by President Jonathan a few minutes earlier at the same venue.
It had been speculated that the separate meetings both the president and the group of four governors had with the former leader  were a means to douse the tension in the ruling party.
Twenty-four hours after the Abeokuta visit to the former president, the governors paid similar a visit to two former military leaders, generals Ibrahim Babangida and Abdusalami Abubakar in Minna, the Niger State capital.
In Minna, the northern governors said there was the need for intense consultations to find ways of ending the crises in the country.
Their visit to Minna was the third in the series of their consultations with critical stakeholders that could help chart a path for peace within the PDP.
After the meeting, Aliyu told journalists that the governors were consulting with elder statesmen with a view to seeking their opinions on the crises in the polity and how to resolve them.
He said: “We are consulting with our elders and leaders at least to look at some of the crises and solutions to the problems that some of us perceive we are facing.
“Solutions to the issues like  the Governors’ Forum crisis and other political issues and we are consulting to make sure that we all understand the issues and carry our people along.”
On the decisions taken at their meeting, Aliyu explained that it was too early to say the way forward as they were still consulting, adding that they had not decided yet on the next step to take.
Meanwhile, LEADERSHIP Sunday last night learnt that the governors will continue with their advocacy visit to former Nigerian leaders today.
They are scheduled to visit former President Shehu Shagari in Sokoto today.
Also the governors are expected to meet former Head of State, General Yakubu Gowon and former Minister of Defence, General TY Danjuma within the week.
Source: Leadership

INEC Has Absolutely No Reason Not To Register APC, Says ACN