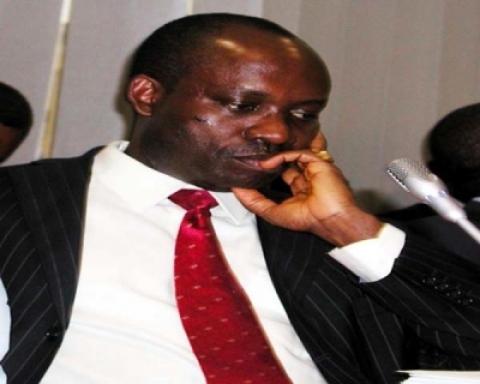 A three-member APGA screening panel (the party constitution says they should be seven) on Friday, refused to clear Professor Chukwuma Soludo for his aspiration to contest for the November governorship election in Anambra State on the platform of the party.
Elombah.com can confirm that however, that the hand of President Goodluck Jonathan is prominent in the disqualification of the former CBN Governor from the race.
Subscribe to our newsletter
While officially, the APGA 3-man screening panel disqualified Professor Soludo over an invitation letter issued to him by the Economic and Financial Crimes Commission [EFCC] in December 2012 inviting him to come and clarify issues with the EFCC, Elombah.com learnt that last Sunday, the APGA National chairman, Chief Victor Umeh called Professor Charles Soludo and pointedly asked him to withdraw from the gubernatorial race, after he had bought the form and paid N10 million. His reason: Governor Obi had informed him that President Goodluck Jonathan does not want Soludo to run.
This reporter was also told the Nigeria’s Ambassador to Spain, Mrs Bianca Ojukwu, the party leader also called in the same manner. Elombah.com learnt that the wife of late Odumegwu Ojukwu told Soludo not to run, the former CBN governor replied: “No, I am going for the primaries, let me be defeated there”.
We can also reveal that when the issue of the EFCC letter that asked the Professor to appear at the EFCC offices was used by the screening committee to disqualify the Professor –for the reason that the EFCC has an open file on him  and that until the file is closed APGA will not allow him to be their candidate in the gubernatorial race, Elombah.com gathered that one of the members out of the 3-man screening panel raised the issue of illegality of the grounds of disqualification of Professor Soludo. The member pointed out that the grounds were illegal and unlawful but he was shunned and told that it was not a matter of ‘law’ but a matter of ‘politics’.
According to Uche Ezechukwu, the disqualification was a logical outcome of all that had happened since the former CBN governor joined the race.
The news of Professor Soludo’s entrance into the APGA had raved up excitement throughout the State among the youths and professionals who had previously been disenfranchised by the soiled politics in Anambra. It seemed life was injected into the APGA again which suffered serious disappointment with the death of the former head of State of Biafran Republic, Chukwuemeka Odimegwu Ojukwu.
Observers believe that the death of Ojukwu, the near completion of Peter Obi’s two terms in office, and the abandonment of APGA by Governor Rochas Okorocha of Imo State – caused core supporters and members of APGA to believe the end of APGA has come – until the public announcement of Professor Soludo’s entrance into the party.
“His entrance into the party injected new hope into the core believers of the Igbo project – that the APGA will not collapse – that perhaps, APGA will govern Anambra for a third term.”
“I can only reveal that Soludo was not disqualified by his party nor by the people he had wanted to give service and leadership, but rather by some people working on behalf of those who insist that Ndigbo do not deserve to be governed by their focused and purposeful ‘first-elevens’, lest Igboland becomes the better for it”, Uche Ezechukwu said.

The power brokers in APGA suspected that Soludo, who has the overwhelming backing of the Anambra elite, intelligentsia and masses, must have something up his sleeves. They could not afford to disobey the president by risking allowing Soludo to go for the primaries, as anything can happen. Hence, the disqualification at the screening.
On why Jonathan does not want Soludo to run, some sources say President Jonathan is reported to be concerned that Professor Soludo may not give him the support in 2015 against the Presidential race – if he becomes the governor of Anambra.
However, information available to elombah.com show that Ex President Olusegun Obasanjo had mounted enormous pressure on President Goodluck Jonathan to impose Senator Emmanuel Nnamdi Uba, commonly called Andy Uba on the PDP as ‘consensus candidate’ for Anambra 2014 gubernatorial race.
Another source said: “The abrupt abortion of Soludo’s candidacy is not be unconnected to the instructions from the Presidency to the leaders of the APGA to halt the candidacy of Professor Soludo in order to pave way for the People Democratic Party [PDP] aspirant. The favorite candidate of the President’s wife happens to be Senator Andy Uba. It is believed by the Presidency that should Soludo be allowed to contest for the primaries under the APGA – he will win the gubernatorial ticket. And if he wins the APGA gubernatorial ticket – he will win the state elections. Soludo’s victory will mean defeat for the PDP candidate. The President, it is believed instructed for the candidateship of Soludo be truncated to enable the emergence of Senate Andy Uba. Interestingly, the Governor of Anambra State, Peter Obi, the national chairman of APGA, Chief Victor Umeh and the wife of late Chief Chukwuemeka Ojukwu, Ambassador Bianca Ojukwu were utilized to stop Soludo – and inevitably, APGA’s continued rule in Anambra – and by extension, the entire south east.”
However, whether the scheme to impose Andy Ubah on the state will succeed is yet to be seen. The PDP in Anambra remains a divided house. Moreover, there is strong disquiet among Prominent Anambra citizens on this recent development. Individuals that that spoke to elombah.com on this expressed strong displeasure at Soludo’s abrupt disqualification.
According Mr John Okiyi Kalu, “the high wire politics being played by President Jonathan and Gov Peter Obi is unacceptable to us and will surely backfire. If President Jonathan want to settle his feud with Obasanjo it cannot be at our expense. Why impose Andy Ubah as Anambra Governor by all means just to assuage Obasanjo? Did we ask Jona to fight Obasanjo? How can a dog eat shit and a goat’s teeth will be colored with shit?”
Mr Okiyi continued: “Let it be clear that if Soludo is forced out of APGA the same way he was made to lose the last election we will see it as President Jonathan’s disrespect for us and our right to choose who will govern Igbo land. It will signal the end of our support to him for 2015 because politics is a game of you wash my hand I wash yours. Sacrifice yourself for Obasanjo, if you must. But NOT our Soludo Solution. If Chukwuma Soludo is not allowed to run with APGA ticket we, his supporters, will ensure that President Jonathan receives his just reward in the South East. All options will be on the table, including APC and PDM. Enough of this “sacrificial lamb” politics. Time to have a friend for friend and enemy for enemy. We offer no middle ground when Soludo is involved.”
Efforts to get Mr Soludo’s reaction has so far proved unsuccessful, but a source close to him said: “I can confirm that Soludo is not perturbed but is just sorry for Ndigbo and those spineless pretenders who currently posture as their leaders,” But responding to the allegation, the Presidency told elombah.com:
“It is definitely unreasonable to assume that President Jonathan will dictate how APGA Anambra chooses its gubernatorial candidates. Do we need to remind the mentally indolent that President Jonathan is a member of the PDP and not APGA and that there is no way he can possibly interfere in the internal processes of an opposition party? My answer to your enquiry therefore  is that there is no truth to the allegation.”
Governor Peter Obi’s Office in Awka refused to respond to our request for comment.
Source: Elombah

My Oga At The Top Fame, An Act Of God -Obafaiye

Nigerian Universities And The Bastardization Of Academic Procedure By Obinna Akukwe