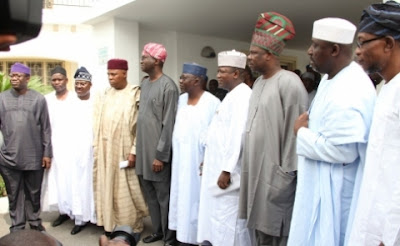 The opposition All Progressives Congress (APC) yesterday rejected the proposed national dialogue, describing it as diversionary and unacceptable. The party said it prefers an all-embracing constitution amendment.
The party’s position, which was made known at the end of a meeting of the interim National Executive Committee, is coming two weeks after a national leader of the party and former governor of Lagos State, Asiwaju Bola Ahmed Tinubu, described the national dialogue proposal as a Greek gift.
Subscribe to our newsletter
As the APC rejected the confab, governors elected on its platform, otherwise known as the Progressive Governors’ Forum, threatened to drag the federal government to court over what they called “consistent flagrant disregard for the constitution and the Appropriation Act as passed by the National Assembly”.
Speaking with political correspondents after the meeting of the expanded interim National Executive Committee (NEC) held at the party’s national secretariat, Abuja, the interim national publicity secretary of the party, Lai Mohammed, said the federal government lacked the credibility to organise a national conference.
He argued that since President Jonathan has disclosed that the report of the confab would be sent to the National Assembly for legislation, “we are not party to it”.
“As much as APC as a party is not averse to a national conference, but this government does not have what it takes to organise it. It has failed in every sector: it has failed in education, it has failed in health, it has failed in economy, it has failed in transportation, it has failed in agriculture, it has failed all round and, suffice it to say, the president himself has publicly declared that the report of the conference would be submitted to the National Assembly for approval.
“This means what they are doing is not a national conference but a constitution amendment and, as a result, we are not party to it.”
He advised the federal government to face the problems confronting the country which, he said, have put a burden on the masses rather than waste time and resources on the confab whose outcome would not be binding.
Mohammed further disclosed that the NEC meeting discussed the on-going harmonisation at all levels of the party and the coming membership registration which, he said, would commence next month.

Some of the APC governors that attended the meeting included Kayode Fayemi of Ekiti, Rochas Okorocha of Imo, Rauf Aregbesola of Osun, and  Abiola Ajimobi of Oyo. The meeting was presided over by its interim national chairman, Chief Bisi Akande.
Earlier at their meeting, the APC governors had threatened to take appropriate constitutional steps to seek redress as regards the crisis that has hit the Federation Account Allocation Committee (FAAC).
Part of the resolutions of the APC governors reads: “That Forum frowns at the continuous illegal and unjustifiable deductions as well as the unwholesome manipulation of the Federation Account and other state resources by the Federal Government.
“Forum vows to apply all appropriate constitutional measures to ensure that Federal Government respects the constitutional rights of states and the Appropriation Act 2013.”
The APC governors equally condemned the recently-conducted senatorial bye-election in Delta State even as they averred that their confidence in the Independent National Electoral Commission (INEC) was shaky.
“Forum condemns the charade of Delta Central senatorial bye-election, calling for the adoption of all appropriate measures to redress the injustice against the people of Delta Central senatorial district.
“In the face of the sham in Delta, Forum’s confidence in INEC is shaky unless urgent measures are set in motion to ensure that Anambra governorship election is credible and transparent.”
The APC governors urged Nigerians “to remain steadfast in the face of desperate socio-economic circumstances and intimidating security challenges as it assures that it will remain committed to take all necessary initiatives to provide life more abundant for all”.
The communiqué was signed by the governors of Ekiti, Imo, Osun, Oyo, Yobe and the deputy governor of Borno State, Umar Mustapha, who stood in for Governor Kashim Shettima.
Source: Leadership