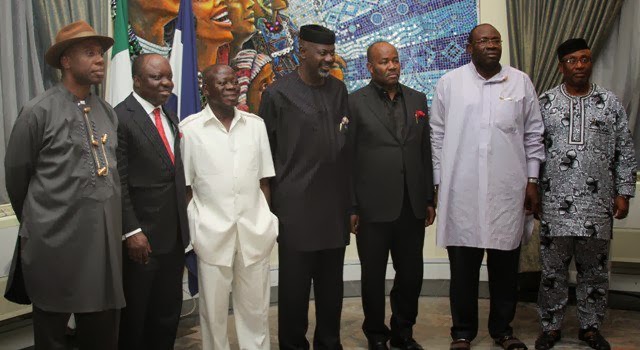 GOVERNORS of the nine oil-producing states of the political Niger Delta, have come under severe criticism by an anti-graft group, the Niger Delta Anti Corruption Network (NIDAN), for allegedly running budgeting processes that are not transparent.
The nine oil-producing states are Abia, Akwa Ibom, Bayelsa, Cross River, Delta, Edo, Imo, Ondo, and Rivers. Thesen states are under the toes of the All Progressive Congress (APC), Labour Party (LP), and the Peoples Democratic Party (PDP), which claimed to be pro-people.
Obviously piqued, NIDAN, in an online statement to AkanimoReports by Rita Kigbara, its Co-ordinating Secretary, on Thursday, strongly condemned what they described as ”a deliberate effort by all tier of governments in the Niger Delta to deny citizens information of how much is allocated to different kinds of spending, what revenues are collected and from where, and also how they are used to meet citizens’ needs”.
Kigbara said the statement was coming after their first strategy meeting this January in Port Harcourt, the Rivers State capital in Southern Nigeria.
The anti-corruption group is therefore, demanding transparency in the budget process such that the budget process at all levels of governance in the Niger Delta ”should be opened up including the number of international supports and other sources of revenue for governments, what they are meant for, and how they were used”.

NIDAN which has chapters in all the nine oil-producing states is also encouraging citizens ”to ask and insist on open budget cycle, and that all citizens should have equal access to the budget which is a public document”,  since according to them,  it is the only way to ensure that there is improvement of service delivery in the region.
They are equally encouraging citizens to make open budget a campaign issue in a bid to ensure that no candidate gets elected in 2015 without endorsing the need for an open and transparent budget.
NIDAN said they will mobilise citizens to press for a commitment by electoral candidatesto work through budget cycle when in office, even as the group expressed displeasure over the deplorable condition of service delivery in the oil region, despite the huge resource accruing to the region.
Meanwhile, at the meeting which took place on Monday, NIDAN elected her pioneer Central Coordinator to pilot their activities and programmes in the coming months.
The newly elected central coordinator is Mr. Jude Ohanele, one of Nigeria’s leading experts on corruption, democracy, and governance. He is also the ProgrammeDirector of Development Dynamics as well as a member of a number of local, regional and international governance and human rights bodies. Ohanele has participated in several international fora across Africa, Europe and America.
In his acceptance remarks, Ohanele promised to work with the state coordinators across the region to rid the region of corrupt tendencies. He also, asked citizens to join NIDAN and her “fight CORRUPTION” campaign as their contribution to improving service delivery in the oil region.
He, however, urged concerned citizens to join them in their website at www.fightcorruption.ng.