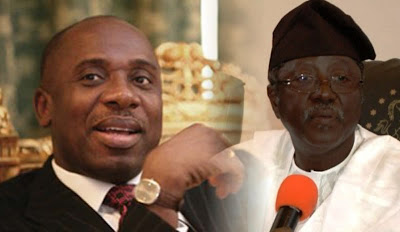 Factional Chairman of Nigeria’s Governors Forum (NGF), Governor Jonah Jang of Plateau State, and Governor Rotimi Amaechi of Rivers State, leading a group of 19 governors, appeared back in the trenches, yesterday.
Jang and Amaechi renewed the NGF crisis after the former scheduled a meeting of governors for Abuja today.
Subscribe to our newsletter
The Rivers governor kicked against the meetings, describing his Plateau colleague as an impostor, desperately trying to portray himself as the leader of the NGF.
Amaechi, who trounced Jang by 19 votes to 16 during the May 24 election of the NGF to emerge the group’s Chairman, warned Jang to desist from further acts of impersonation, saying he might be compelled to take action against him.
Jang was said to have called the meeting of the NGF for Abuja today, during which very sensitive national issues are expected to be discussed.
Sunday Vanguard gathered that the meeting, expected to take place at the Jang’s faction office in Maitama, is to discuss the issue of local government autonomy that was killed by the Senate in the constitution amendment process but endorsed by the House of Representatives.
It was also learnt that dwindling earnings to the Federation Account  from oil arising from unabated theft in the Niger Delta is listed for discussion by the NGF faction.
A notice of the meeting, seen by Sunday Vanguard, read: “The Chairman of the Nigeria Governors’ Forum, Gov. Jonah Jang of Plateau State, has summoned an emergency meeting of members of the forum.
”The meeting will be held on Sunday, August 11, 2013 at the NGF Secretariat, 2 Nana Close, off Erie Crescent, Nile Street, Maitama, Abuja at 7.30 p.m.
“The agenda for the meeting are: Constitution Amendment.”
But Amaechi, in a short message to our correspondent, asked his fellow governors to ignore the meeting and wait for a formal notice of meeting from him, as the Chairman of the group.
The Rivers governor said that the NGF, under his leadership, had not scheduled any meeting for today and that issues to be discussed would be made known to them when a meeting date was taken.

Amaechi said: “Again, I want Nigerians to know that Jang is an impostor, having tried to steal my victory. He was not elected by the majority of governors, who were in attendance during the election on May 24.
“On what basis does he summon a meeting of the NGF? Nigerians should tell Jang to respect himself and desist from impersonating me”.
Amaechi disclosed that he was in touch with the leadership of the National Assembly on the issue of constitution review and that the NGF would take a decision on most of the issues deliberated upon by the NASS.
‘We won’t attend’
It also emerged yesterday that many of the 36 governors might not attend the Jang group’s meeting because of the controversy generated by recent events in the Peoples Democratic Party (PDP) and the NGF.
None of the five PDP governors from the North, who are uncomfortable with the leadership of Alhaji Bamanga Tukur, is likely to attend the meeting by the Plateau governor, whose leadership is seen as a ploy by the Presidency to weaken the Amaechi’s leadership of the NGF.
One of the five governors, Murtala Nyako, of Adamawa State,  who was contacted through his Director of Press and Public Affairs, Ahmed Sajoh, said there was no way he could attend any meeting called by Jang since he did not win the election of the NGF.
Nyako said: “As far as we are concerned, Jang cannot call a meeting of the NGF because he is not the Chairman and there was no time that we elected him as such. That is our position.”
Trouble shooting parley with OBJ
In the meantime, Sunday Vanguard learnt, yesterday, that the Jang group, after today’s meeting, may meet former President Olusegun Obasanjo tomorrow as part of the efforts to resolve the lingering crisis in the NGF. The meeting, according to a source, will be held in Abuja.
“The Chairman, Nigeria Governors Forum, Governor Jonah Jang of Plateau, will, on Monday, lead other members of the forum on a visit to former President Olusegun Obasanjo in Abuja as part of the reconciliation process. You know he is a former president, as well as a former chairman, BoT of PDP and, with his wealth of experience, he has a lot to offer and we are optimistic that he will intervene and the problem will be over,” the source said.
Source: Vanguard