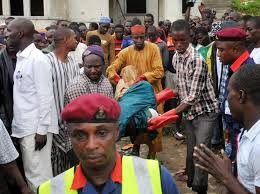 Men of the State Security Services, on Friday evening, stormed the Emergency Department of Asokoro General Hospital in Abuja and quizzed the victims of the bloody attack on an uncompleted building at the Apo Legislative Quarters that left eight people dead.
Although the SSS claimed that those killed were members of the dreaded Boko Haram sect, eyewitnesses and survivors had denied the allegation.
Subscribe to our newsletter
Survivors alleged that the attack was masterminded by the owner of the building that was raided,  who they said had strong connections in government, adding that it was done to force them out of the premises.
But our correspondent who visited the Hospital last night was informed that some SSS operatives came on Friday evening “wielding weapons in search of Boko Haram suspects.”
A source in the hospital who spoke on the condition of anonymity said the SSS operatives arrived by 6:30 pm.
He said, “I saw the SSS operatives at about 6:30 pm in the evening. They went straight to the Accident and Emergency Department to obtain statements from the people who were suspected to be Boko Haram members. They came on a vehicle, about six of them and went straight to the hospital.”
One of the victims also told SUNDAY PUNCH that the operatives came with camera and took the photograph of the ten victims who are currently receiving treatment in the Hospital.
“The SSS officials came with guns, other dangerous weapons, took our photographs, our names and other important details. Their faces were unfriendly and they neither laughed nor smiled,” he stated.
Several calls and text messages to the Chief Medical Director of Asokoro Hospital, Dr. Ahmadu Abubakar, for his reaction were not replied.

The victims of the attack, who are currently receiving treatment in the hospital, are Ibrahim Mohammed (Zamfara State 32); Ibrahim Lawal (Zamfara, 25); Shamshudeen Abubakar (Zamfara, 20); Sani Abdulrahman (Katsina, 17); Yusuf Abubakar (Zamfara,  20) and Yahaya Bello (Katsina, 20)
Others are Abubakar Auwal  (Kano, 18); Muritala Abubakar (Zamfara, 20); Ibrahim Bala (Kano, 18) and Nuhu Ibrahim (Zamfara State 20).
The SSS Deputy Director (Public Relations),  Marilyn Ogar, had on Friday claimed that the victims were gunmen who engaged the SSS operatives in a gun battle.
According to her, the security operatives were attacked by the sympathisers of the sect when they went to a building on Soji Aderemi Close, off Bamanga Tukur Street, Apo Quarters, to exhume weapons  buried in an uncompleted building  by people suspected to be members of the Islamic sect.
She further stated that the attack was sequel to information obtained from two Boko Haram elements, Kamal Abdullahi and Mohammed Adamu, who had earlier been arrested for terrorist activities. She added that the suspects led the security team to two uncompleted buildings where arms were purportedly buried.
Ogar declined further comments on Friday.
“I am busy now and I’m at a public place;  I can’t speak on anything, if I have any new information, I will speak on it,” she said.
Some SSS operatives in six vehicles had stormed two uncompleted buildings at Soji Aderemi Close, Apo, where they shot dead eight persons, injured 10 and arrested 12 others whom they described as Boko Haram sect members.
Meanwhile, former Vice-President Atiku Abubakar has said that only an independent investigation by Nigeria’s parliament, the judiciary or civil society will unravel the facts behind the killings.
In a statement by his media office on Saturday, Atiku said, “For me, this issue borders on human rights, the rule of law and the sanctity of human life. Our security services should stick to their role under the constitution: make the country safe.”