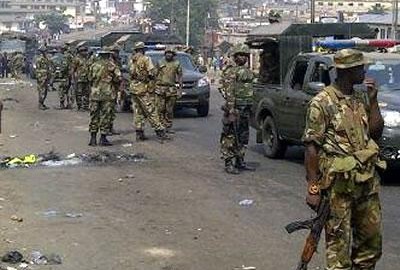 The Nigerian Army yesterday said that its 7 Division of the Nigerian Army in Borno State killed 38 members of the Boko Haram, as they Army also added that  a soldier died in a gun battle during tha attack which took place at Damboa town of Borno State.
In a statement issued by the Spokesperson of the Army Division Captain Mohammed Dole in Maiduguri, he said; “During their regular robust patrols of their Area of Responsibility (AOR), the troops of 195 Battalion in Damboa successfully repelled planned Boko Haram Terrorists’ attack on residents and military camp. In the early hours (0100 hours) of Thursday, 9 January 2014, the insurgents attempted to launch an attack on Damboa to cause havoc and mayhem, but due to the timely information and gallantry displayed by the troops, the attack was repelled and inflicted heavy casualty on the terrorists.
Subscribe to our newsletter
Speaking further he added that; “Some of the insurgents fled with various degrees of injuries.
“Three (3) vehicles, one Sienna LE, (AE 844 DKW) laden with cylinders and Improvised Explosive Devices, one 911 truck (SA 575 BBU) loaded with 200 bags of food stuff and one Mitsubishi canter truck (XD 441 GG) were recovered.

According to the statement there was a combined ground troops and Nigerian Air Force aircraft are in hot pursuit of the fleeing terrorists in the general area of Damboa and surrounding villages. It appealed to the public to avail the troops with useful information for tracking the fleeing terrorists.