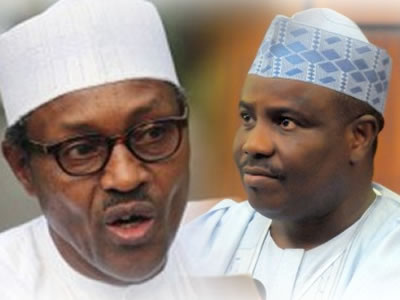 Members of the All Progressives Congress (APC) are currently divided over who between former head of state and presidential candidate of the defunct Congress for Political Change (CPC), Gen. Muhammadu Buhari, and the Speaker of the House of Representatives, Hon. Aminu Tambuwal, will fly the party’s flag in the 2015 presidential election.
Subscribe to our newsletter
Saturday Tribune gathered that while influential figures in one of the constituent parties, the defunct Action Congress of Nigeria (CAN), and some Peoples Democratic Party (PDP) elements in the new merger party are strongly rooting for Tambuwal, Buhari still commands overwhelming following in the defunct CPC and ANPP.
A highly placed APC source in Jigawa State told the Saturday Tribune that Buhari’s following in the merger arrangement is so strong that at a recent meeting held in Kaduna, the former governor of Kano State, Malam Ibrahim Shekarau, who could have posed a threat to Buhari’s candidature, was prevailed upon to step down for the retired General.
Those who are rooting for Buhari to fly the APC’s flag believe that he remains the strongest presidential material in the merger party that can effectively checkmate President Goodluck Jonathan or whoever the PDP presents for the 2015 presidential election.
The source, who preferred anonymity, told Saturday Tribune that both Buhari and Shekarau were persuaded at the meeting to forget whatever political differences existed between them and work as a formidable team for the success of the party.

At a recent event in a South-West state, attended by Tambuwal, a state governor was said to have invited one of his friends to “come and meet our next president” (referring to Tambuwal, who had just arrived), giving an impression that the choice of Tambuwal as the APC standard bearer in 2015 election was a done deal.
“Those who are rooting for Tambuwal believe that he will be more politically marketable than Buhari, given his youthfulness; but with the retired General’s increasing popularity in the North, the fear is also real that the new party may sound its own death knell in the zone if it fails to field Buhari,” the source said.
The Interim National Chairman of the party, Chief Bisi Akande, has, however, denied that the party had started thinking of who would be the party’s presidential candidate.
“If we start thinking about that, we will start digging political well. We want to build a political structure. By the time the structure is solid, we will choose whoever will represent us in Aso Rock. I don’t think that will give us a problem,” he said in an interview last week.
Source: Tribune