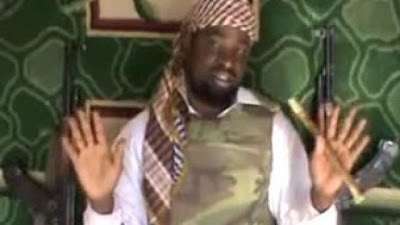 Boko Haram Leader, Abubakar Shekau, has claimed responsibility for the December 2 attacks on military formations, according to Daily Trust newspaper report.
Shekau, who spoke in Arabic, Hausa and Kanuri in a 40 minutes recorded video, rejoiced over the successful attack on Nigerian forces and vowed to extend the “crusade” to the shores of the United States of America.
The sect had attacked the 79 Composite Group of the Nigerian Air Force in Maiduguri, destroying five aircrafts and buildings. It also bombed the 333 Artillery Regiment in Maiduguri, destroying structures and vehicles.

Although the Nigerian Army claimed that 25 insurgents were killed that day, Shekau in the new video rubbished the claim, saying seven of his men died. He also claimed that “many soldiers” lost their lives.
In the video, Shekau said, “This message is intended as a glad tiding. Allah the Almighty has given us victory in the attack we launched inside Maiduguri (which was) called Borno in ancient times.
“We stormed the city and fought them (and) Allah blessed us with lots of booty. Three of our men carried out suicide bombings, three of our men died from bullets, one of them died from friendly fire and not from your bullet. May Allah accept them as Martyrs and may we attain such honour.
“Useless, stupid America! If you could do anything you would have done it in your country. Vagabond. You are boasting you are going to join force with Nigeria to crush us, bloody liars. You couldn’t crush us when we were carrying sticks. Is it today when we storm your barracks and commandeered your things one after the other?
“By Allah, we will never stop. Don’t think we will stop in Maiduguri, tomorrow you will see us in America. Our operation is not confined to Nigeria, it is for the whole world.”

Court Ruling On Rivers House Of Assembly: APC Vows To Resist Any Attempt To Impeach Amaechi By 6 Lawmakers