Tiv Land On Fire: Where Are The Fulani Apologists Like Waku, Shuluwa, Unongo and Tsav 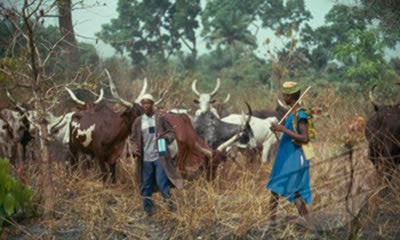 As at last count, over 700 Tiv people of all ages, women, old people children and the elderly have been murdered by Fulani militia.

In fact Governor Gabriel Suswam escaped by the whiskers. All the local governments inhabited by the Tivs have been attacked. Curiously not a single word from the Fulani apologies like Chief Joseph Waku, Chief Abu King Shuluwa, Dr Paul Unongo and of course Alhaji Abubukar Tsav.
Subscribe to our newsletter
For those who are not aware and may want to know the truth, please read the truth below: The persistent Fulani militia and Boko Haram attack on the Middle Belt and Northern Christians is to decimate their population in line with the so called propaganda and fallacy of major Muslim North.
The hidden hand behind this plot and war on the Middle Belt and Northern Christians has been discovered to be Jama atu Nasri Islam (JNI). The utterances of their secretary Alhaji Khalid Aliyu has confirmed that the JNI orchestrated the plan to reduce the Northern Christians because of the way they voted for Dr Goodluck Jonathan to win the 2011 presidential election.
The JNI feared that with the massive Christian population in the North, they will still vote for President Goodluck Jonathan in 2015 to win the election with another landslide. The JNI and Northern politicians like Rabiu Kwankwaso, Murtala Nyako, Junaid Mohammed, General Buhari, Sheik Ahmed Gummi and many others therefore hatched the brutal plan to deal with Northern Christians mercilessly for betraying the Northern oligarchy in 2011.
Sheik Ahmed Gummi, a Kaduna based Islamic preacher confirmed that to an on-line media called Sahara Reporters last February. Murtala Nyako also confirmed that in his speech in America last week. As it is now, the Middle Belt states of Benue, Plateau, Nasarawa, Southern Kaduna, Adamawa and Taraba are under siege by sponsored Fulani militia to wipe out Christians in those states.

The Federal government must act quickly to check the catastrophe befalling Christians in Northern Nigeria. The Jama’atu Nasir Islam secretary Alhaji Khalid Aliyu must be arrested immediately and be prosecuted.
The Tiv Land for now is on fire, where then are the Fulani apologies likeChief Abu King Shuluwa, Chief Joseph Waku, Dr Paul Unongo and Alhaji Abubukar Tsav to plead with their Fulani friends on behalf of their Tiv kinsmen and kith.
Where is the Northern Governors Forum? Where is the Arewa Consultative Forum (ACF)? The Northern Nigeria is on fire from Fulani militia and Boko Haram. Fulani militia or not, Boko Haram attacks or not, voting for Dr Goodluck Jonathan in 2015 is a fait accompli and is a task that must be accomplished to the later.
Goodluck Nigeria.
Nigeria Sai Goodluck.
No way for Boko Haram sponsors to lead Nigeria!
Ndiameeh Babangida Babreek.
ndidi90call @gmail.com.

I Can’t Waste My Time On El-Rufai, He’s Too Small –Oritsejafor