The Untold Story Of President Jonathan’s Visit To Imo 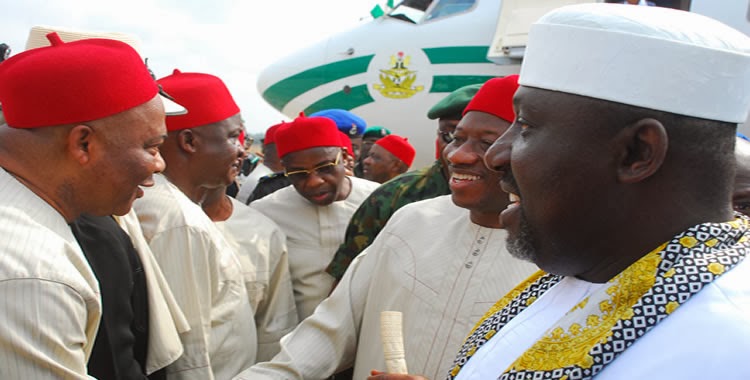 Subscribe to our newsletter
A dress rehearsal of likely scenario of what to expect in Imo PDP, if proper measures are not taken, manifested during President Jonathan’s visit to Imo State.
The presence of an unlikely “visitor”, Owelle Rochas Okorocha, the Governor of Imo State stemmed off what would have raised eye brows at the Sam Mbakwe Airport, Owerri as the bigwigs in the Peoples Democratic Party, PDP in Imo State waited to receive President Goodluck Jonathan on his first visit to Imo State since 2011, which took place last Saturday.
Okorocha, had earlier boasted that he was not going to be around to accord Jonathan a hand shake welcome as he disembarks from the Presidential jet that fateful Saturday.
However, Okorocha shocked the PDP big men, as they were bewildered to see the Imo state Governor, already seated tight at the VIP Presidential lounge, as early as 7am waiting for Jonathan.
Okorocha’s early arrival and presence altered the entire equation as already, there had been suspected internal squabble with mutual suspicion between the Deputy Speaker of the House of Representatives, His Excellency, Rt Hon Emeka Ihedioha, who is a son of Imo state, and ranking political office holder in the country and Senator Hop Uzodimma, the chairman, Central planning Committee of the President’s visit, who will be the first not only welcome but also to shake the hands of President Jonathan as he lands Imo state.
Under the official protocol, the Deputy Speaker, who is the seventh citizen of Nigeria, and the highest political officer from Imo state ought to be the right person to shake the hands of the president first, before any other person, but the Uzodimma camp believes it ought to be the Senator representing Orlu zone, since the Senator is the chairman of the committee organizing the Presidential Visit, and again, he is a Senator of the Red Chamber, which is higher than the Green Chamber of House of Representatives.
Therefore, as the Presidential Jet was sighted on the sky, the power of supremacy intensified as Imo PDP bigwigs “wrestled for power” on how to line up for Presidential hand shake which precedes the president’s arrival.
While Uzodimma jostled for the vintage position to gain advantage by shuffling through the lines ahead of Ihedioha, the Deputy Speaker took the whole scenario with calm but was betrayed by body language and posture which suggested he wants to move, until Okorocha from no where emerged, and was by protocol propelled to be at the starting line up to receive the president.
But that was where Okorocha’s duty ended, as the President automatically indentified with his “men”, Ohakim, Udenwa, Uzodinma, Ihedioha, Chris Anyanwu and others before he flew with a Helicopter with these men to Eze Cletus Ilomuanya’s palace at Orlu, whereas a dejected Okorocha was left alone to head back to Government House, Owerri.
Beyond the facade of good raport among Imo PDP BIG Wigs there are indications that big men may be at war over ego and positions, even after the president’s visit.
However, pundits believe that Ihedioha comported himself well according to the dictates of his position, but Senator Uzodimma still believes that despite being the seventh citizen of Nigeria, courtesy his positions as Deputy Speaker, Ihedioha remains his junior lawmaker, because he is a Senator; and wields enough power within the PDP hierarchy in Abuja.
In a related development business mogul and Information Technology guru, Dr Uzoma Obiyo has commended the President of the Federal Republic, Dr Goodluck Jonathan for making out time to visit Imo State.

The Ikeduru born politician also gave kudos to the Peoples Democratic Party, PDP, and Imo State chapter for choosing Bar Nnamdi Anyaehie as the new chairman that succeeded Chief Eze DuruchIoma SAN.
Speaking to Trumpeta, Chief Obiyo said that the visit of President Jonathan was a good booster to Imo PDP, and has sent shivers down the spines of the opposition parties in the state.
Obiyo maintained that it is now left for Imo PDP to build on the Jonathan’s visit and cement the unity which Jonathan has kickstarted by harmonizing the strength of the returnees and move Imo PDP to enviable height.
The Chief Executive Officer of Multi Net said that President Jonathan has shown leadership qualities that have put the PDP as the party to beat in the Nigeria, especially in Imo State, which he said is a PDP catchment Area, regretting that what happened in the 2011 governorship election is now in the past as Imo PDP is poised to reclaim Douglas House in 2015.
The urbane politician commended Imo PDP for choosing Chief Nnamdi Anyaehie as its chairman without any rancour, pointing out that it was an indication that the PDP in Imo State is peaceful, with all the leaders working on the same page.
Chief Obiyo disclosed that Chief Anyaehie is fit and capable to move Imo PDP to another level, having garnered enough experience in running multi- billion naira business empires, adding that his appointment must be commended.
“The Appointment of Anyaehie is commendable. He has the capacity to run Imo PDP to success. He is already a tested technocrat. So, it is not a new turf for him” the entrepreneur said.
He doffed hat for the exceptional way Imo PDP mobilized the people to troop out and receive the President, adding that the crowd at Dan Anyaim Stadium that Saturday was intimidating and mammoth.
“It was a tumultuous crowd unprecedented in the history of the state. It is also an indication that Imo PDP is ready for the 2015 electoral battles” he said
Meanwhile still on reactions following the President’s visit to Imo State, a chieftain of APC in Oguta L.G.A, Chief Ezediaro Henry Uzoma has described the visit to Imo State last weekend as a medicine after death. Chief Ezediaro dropped this hint with our correspondence in the inaugural meeting of the APC ward and L.G.A executives, TC members, TC chairman and party leaders of Oguta L.G.A. This meeting was held in his country home in Oguta, on the same date President Jonathan came to Imo State.
Addressing the party faithful, Ezediaro stated that the president visit to Imo State is a welcomed development. “For the number one citizen of Nigeria to visit Imo State is a thing of joy. But what is wrong and unacceptable is the purpose of the visit” Ezediaro maintained that for “PDP led government at the centre to think of winning back Imo to PDP is a big mistake. This is because what the PDP could not do in Imo State in 12 years, the APC have done in less than 2 and half years. He stated further, that Oguta people and Imolites in general have embraced APC in Imo State because of the various achievements of the government of Owelle Rochas Okorocha” Some of the achievements he mentioned are the free education, good roads, hospital, prompt payments of salaries and pensions etc. Imo people will not afford to go back to darkness after they have tested light.
Ezediaro in another phrase said that the PDP rally in Owerri last Saturday is like trying to catch a horse that have already left the stable. “This is like trying to change the hands of the clock. Imo State has experienced the types of infrastructural development, which she have never seen since the creation of the State. Anybody who says Imo State should go back to PDP is an enemy of the progress of Imolites and therefore enemy of the state.
Ezediaro in his closing remarks advised the leaders of Oguta L.G.A for the need for peace with them, and for all the leaders to support the Apex leader of Oguta L.G.A led by Prof. A.G Anwuka who is also the SGI to Imo State government to guarantee the parties victory in the forthcoming elections.
Source: Imo Trumpeta