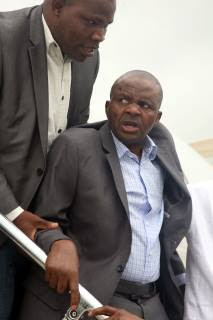 The political crisis rocking Taraba State deepened, yesterday, with the dissolution of the state executive council by the Governor, Danbaba Suntai.
Apart from sacking the cabinet, Suntai also removed the Secretary to the State Government, SSG, and appointed Mr. Timothy Gibon Kataps in his place. Similarly, Suntai fired his former Chief of Staff, CoS, and named Alhaji Aminu Jika as his new CoS.
Subscribe to our newsletter
The governor, who made the sweeping changes through his Special Adviser on Media and Publicity, Mr. Sylvanus Giwa, asked all the affected commissioners and officials to hand over to their respective permanent secretaries with immediate effect.
Although Suntai explained that the move was aimed at strengthening the administration, analysts believe the recuperating governor wants to take greater control of his government, which has been in the hands of those he does not trust, for about a year.
The undercurrent has exposed the divided loyalty between those in support of Suntai, who returned to the country on Sunday, and his deputy, Garba Umar, who has been acting in his absence in the last 10 months.
While the Speaker of the House of Assembly, Mr. Haruna Tsokwa asked the governor to come and address the Housew of Assembly at plenary as a condition for resuming, the Majority Leader, Mr. Joseph Albasu Kunini, asked the governor to start work with immediate effect.
Angered by the controversy generated by the governor’s resumption letter, the Attorney General of the state, Timothy Gibon Kataps, said Suntai had resumed work since August 26, 2013, a day after he was flown into the state from the United States.
Kataps, who was later in the day named as the new SSG by Suntai, said that there was no need for the lawmakers to debate the letter submitted by the governor just as he was not expected to address them on his intention to resume work.
Kataps said he had to cut short his trip to Calabar, the Cross River State capital, where he was attending the Annual Conference of the Nigerian Bar Association, NBA, to clear the air on the matter so that the state was not thrown into avoidable crisis.
The new SSG asked the Speaker of the State House of Assembly, Mr. Haruna Tsokwa, not to heat up the polity by insisting that the governor should address members of the House as a prelude to resuming work. He argued that asking the governor to appear before the members or the members debating the letter sent to them would amount to over-reaching the provisions of the Nigerian Constitution.
Suntai holds secret meeting with lawmakers
Meanwhile, Governor Suntai yesterday held a marathon meeting with the leadership and members of the state House of  Assembly in a desperate move to break the deadlock over his resumption of duties.
The first leg of the meeting, which started at about 4pm lasted till 7:30pm before the Speaker sent an aide to inform anxious journalists that there was nothing to report to them, as they were continuing late into the night.
Sources at the meeting hinted that the governor was trying to appease the lawmakers to accept his resumption letter in good faith and allow him resume work without passing through the rigours of addressing them.
The governor is said to have also used the enlarged meeting to explain the rationale behind the dissolution of the state executive council, yesterday, and pleaded with them to support him in approving the list of new ones to be sent to them.
The meeting became necessary following the sharp disagreement between lawmakers loyal to the recuperating governor and his deputy.
Many of the lawmakers led by the Speaker, Mr. Haruna Tsokwa, who is backing the Deputy Governor to continue acting, are opposed to the resumption of work by Suntai until he addresses them.

On the other hand, the Majority Leader of the House of Assembly, Mr. Albasu Kunini, who leads a faction of the lawmakers, insists the governor had since resumed duties with his submission of letter of fitness to them.
His position was re-echoed by the Attorney General of the State, Timothy Gibon Kataps, who said that the law did not require the governor to address the House before resuming work.
It was unclear at press time if the two sides would agree on a common position as those loyal to the acting governor were said to be upset that the recuperating governor has not treated the acting governor fairly since his return on Sunday.
Suntai’s handlers were said to have prevented Umar from seeing him and discussing any state matters with him.
Although many thought Suntai was unaware of his environment, he is reported to have spoken for the first time, yesterday.
Suntai is said to have spoken while inaugurating the new Secretary to the State Government, Timothy Gibon Kataps, who was until yesterday, the state Attorney General and Commissioner for Justice.
The governor reportedly advised the new appointee to place the interest of the state above all other considerations.
Sack of state executive illegal—Falana
Meantime, Lagos Lawyer, Mr. Femi Falana, SAN, yesterday argued that the sack of the executive council by Governor Suntai was illegal, since he was yet to resume office officially after his return.
In a statement issued yesterday, Falana contended that the failure of the governor to report in office for work has rendered his action invalid as well as validating the power of the deputy governor as the acting governor of the state.
To this end, he urged members of the state executive council purportedly sacked to remain in their duty posts, until they are able to meet with the governor.
Falana who expressed fears that the sack may be the handiwork of those he called “governor’s captors”, said something urgent should be done not to plunge the state into political crisis before it is late.
He said: “In the circumstance, the members of the Taraba State Executive Council should remain on their duty posts and insist on an urgent meeting with the governor with a view to confirming if he had actually taken the decision to sack them.
“On its own part, the House should not screen and confirm the list of commissioners being prepared by the cabal to replace the ‘sacked’ cabinet members.”
He argued that since the return of the governor to the country five days ago, “he has been held incommunicado by those who have held him hostage. All efforts by the Acting Governor, the Speaker of the State House of Assembly, the Director, Department of State Service,DSS, and Commissioner of Police of Taraba State to meet with the Governor have been turned down by his captors due to the fact that he is not in a mental position to recognise anyone. The popular demand of the people of Taraba State that the Governor should address them has also been ignored by the cabal,” he added.
Calling on President Goodluck Jonathan to rise to the occasion, Falana warned: “However, before the State is plunged into further political crisis the attention of the captors of the ailing Governor ought to be drawn to Section 1(2) of the Constitution which stipulates that no person or group of persons can take over the country or any part of it except in accordance with the provisions of the said Constitution. “The Federal Government should therefore direct the security forces to round up the coup plotters who are currently ruling Taraba state by usurping the constitutional powers of the elected Governor.”
He said that the Federal Government should not hesitate to defend and protect the Constitution in Taraba state in the interest of law and order in the country.
Source: Vanguard