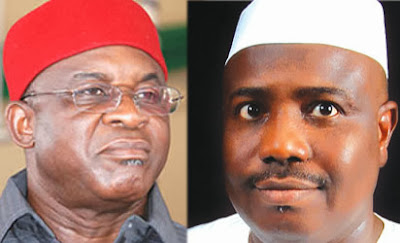 FOUR presiding officers of the National Assembly have rejected official houses being built for them by the Federal Capital Territory Administration (FCTA).
Senate President David Mark, House of Representatives Speaker Aminu Waziri Tambuwal, Deputy Senate President Ike Ekweremadu and Deputy Speaker Emeka Ihedioha have cited insecurity and delay in the provision of infrastructure as the reasons for their action.
FCT Minister Bala Mohammed, who gave the hint at the weekend, disclosed that the authorities had consequently discontinued the construction of the N3 billion official houses by the construction giant, Julius Berger, at the Maitama Extension (renamed Goodlock Jonathan District) located behind the Lungi Military Barracks in the city centre.
The FCTA last year proposed to spend N1.5 billion on construction of the new official houses for the National Assembly’s presiding officers as well as another N1 billion for completion of the official residence of the vice president.
During the 2012 budget defence session before the House of Representatives Committee on FCT, Mohammed said the total cost of the project was N3.044 billion.
He said while N324 million was appropriated in 2011 for the new residences, only N146 million had been expended, leaving a balance of N178 million. He explained that for 2012, N1.5 billion would be required for the project.
Mohammed said that the National Assembly’s presiding officers that would benefit from the new residences were the Senate President and his deputy as well as the Speaker of the House and his deputy.
For the vice president’s residence, the minister said N2.452 billion was required to complete the project, which was already 66. 8 per cent completed last year.
Citing insecurity at their Apo Legislative Quarters in Abuja, the minister in February 2011 told the parliament during a budget defence that four principal officers of the National Assembly would benefit from a new set of residential accommodation being planned by the FCTA at the Maitama Extension Area in Abuja.
His word: “The National Assembly is the highest democratic body we have apart from the Presidency. And the National Assembly complex at Apo has been sold out to the public. The place is being inhabited by all sorts of people. Leaving them there will expose them to the vagaries of the society. And anybody can be a principal officer; so whoever is there and you leave him there, you are not being fair to him.”
On why the government was embarking on the multi-billion naira project when the principal officers were already accommodated at the Apo Legislative Quarters in Abuja, the minister had told the Sixth Assembly FCT Committee that the decision was predicated on the insecurity in Abuja and some parts of the country.

“Our decision is taken out of a sheer sense of responsibility. But with responsibility comes the issue of security, the issue of the latitude and leverage which officers holding certain offices must have.
“The National Assembly is the highest democratic body we have apart from the Presidency. And the National Assembly complex has been sold out to the public. The place is being inhabited by all sorts of people.
“We were there on inspection and so we cannot guarantee the safety and security of principal officers of the National Assembly who take decisions on very serious and sometimes critical issues that may impinge on the sensibilities, perception and feelings of others. We must, as a government, protect the principal officers of the National Assembly.
“Leaving them there will expose them to the vagaries of the society. And anybody can be a principal officer; so whoever is there and you leave him there, you are not being fair to him. That is why government decided that as a second tier of government, we will go to an area which is secure and safe for our principal officers to live”, the minister had said.
But fielding questions last weekend on the progress made so far on the project, the minister, represented by the FCDA Director of Public Building, Bernard Lot, said work had already begun on the project before the recent rejection of the area by the principal officers.
“You will recall that we had started that project, and there is a contractor carrying out the road work. You can actually access the place because the contractor has actually commenced work and has also done reasonably well on that.
“But that too was affected by budgetary provisions. You know government has dwindling resources, but there is an issue there because development is not taking place fast in that area. And so the principal officers of the National Assembly have said that they don’t want that place because of the current security situation in the country.
“Though it is behind the army barracks, we cannot isolate them there, and government in its own wisdom has said that since they don’t want it, the authorities have decided to convert the buildings to guest houses and scale down the initial cost of the project. That is what we are doing now. We are scaling down the cost of the project to serve as guest houses to the principal officers of the National Assembly.
“As for their new residences, you are all aware that we have already cleared a new site located in the Three Arms Zone in the Central Area. The President has already given his anticipatory approval and the contractor has been asked to commence work on the project,” he said.
On the vice president’s residence, the minister explained that paucity of funds in the 2012 budget was responsible for the delay in the completion of the project.
“For a whole year (2012), there was no budget for that project but under 2013, we had an appropriation and the contractor is working. We had a cause to seek a variation on the contract to implement the second phase of the project. But it was stood down on the grounds that no project will have a variation above 15 per cent.
“So, we are having an implementation strategy to ensure that we complete that project on time, including the very essential aspects of the work, including the holding, gatehouse, bedroom, storage, among others.
“The contract is ongoing and we are going to complete the contract while we leave the issue of furnishing. The issue of furnishing is part of the phase two of the project such as the banquet hall, guest houses, and some security installations which are very vital for the vice president to live in because of the current security situation in the FCT,” he said.
Source: Guardian