Robert Mugabe Blasts Nelson Mandela, Says He Is A ‘Coward’ And An Idiot 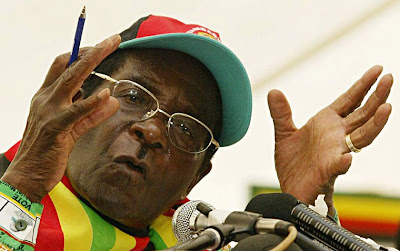 Zimbabwe’s President Robert Mugabe blasted Nelson Mandela as a “coward” and “idiot” during a rally today to celebrate Mugabe’s record seventh term in office following his victory in the country’s disputed elections last week.
In one of his trademark fiery speeches, the 89-year-old Mugabe — who has led the southern African country since 1980 — claimed that he should be hailed as an African hero instead of Mandela, the anti-apartheid icon and former president of neighboring South Africa.
Subscribe to our newsletter
“My huge victory in these elections proves I am the greatest leader in the history of Africa,” Mugabe told supporters in Zimbabwe’s capital, Harare. “I have spent my whole life fighting for the Zimbabwean people and they continue to elect me.”
Mugabe tightened his iron grip on power in last week’s elections after he received 61 percent of the vote while his ZANU-PF party won a two-thirds majority in parliament, though there are allegations of widespread fraud and violence against the opposition.
“I am the greatest African who has ever lived,” Mugabe said. “The world should love me more than the idiot Nelson Mandela. F**k Nelson Mandela. As I waged war against colonialism, that coward sat on his ass in prison for 27 years. He’s a coward.
“I have been leader for 33 years. Mandela was president for five years. What kind of idiot gives up political power? Great leaders like me know how to stay in power.
“While Mandela sits comfortably in a hospital, I stand before you fit and healthy, ready to lead this country and the Zimbabwean people for at least another 25 years,” Mugabe added, referring to the 95-year-old Mandela’s ongoing treatment for a lung condition.
Mugabe also mocked South Africa’s multicultural “rainbow nation” in his speech, claiming that Mandela didn’t care about the interests of black Africans.

“There is only one color allowed in Zimbabwe, and it is black,” he said. “I banned the color white in my country. Nelson Mandela told all the white people to stay in his ridiculous rainbow nation. He should have thrown all of the whites and homosexuals out of his country like I did. South Africa would be so much better off.”
The Lord of Misrule
Mandela served as South Africa’s president from 1994 to 1999 and is highly regarded at home and worldwide for his role in ending apartheid and becoming the country’s first democratically elected leader.
Similar to Mandela, Mugabe played a pivotal role in the struggle for black-majority rule against the white minority-controlled Rhodesia, which became Zimbabwe.
In recent years, however, Mugabe and his government have plunged the country into diplomatic and economic isolation due to corruption, authoritarian rule, political violence and human rights abuses. Mugabe drew international condemnation in particular over his land redistribution policies, in which prosperous commercial farmers were chased off their land by violent mobs.
South Africa, which borders Zimbabwe, has pursued a policy of silent diplomacy with Mugabe, appeasing him in public while supposedly criticizing him in private.
South Africa’s President Jacob Zuma, who congratulated Mugabe on his presidential victory, said he would review Mugabe’s remarks before making an official statement.
Source: Daily Currant