Rivers Crisis Started As Far Back As Four Years Ago, Says First Lady 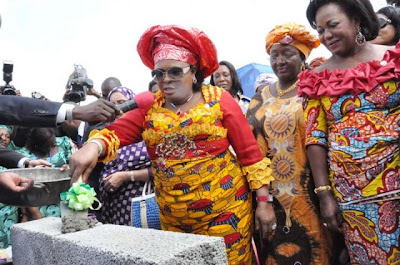 The First Lady, Mrs Patience Jonathan, said in Abuja on Wednesday that she had committed the ongoing crisis in Rivers to prayer and that crisis  started as far back as four years ago.
Rivers has been embroiled in a political crisis which culminated in a free for all at the House of Assembly last week, with some members injured.
Subscribe to our newsletter
Jonathan said this during a courtesy visit to the Presidential Villa by 16 bishops from the South-South geo-political zone.
“Rivers state issue is one thing I’ve committed to prayer because I believe there is nothing God cannot do. God restored me and I’ll do His work without the fear of man.
“The truth will always remain the truth and what God ordains must come to pass and so Rivers issue is something we’ve handed over to God.’’
The president’s wife said contrary to some reports, she had always mediated between Gov. Chibuike Amaechi and other parties in a crisis that began four years ago.
“This matter started as far back as four years ago at Anyugubiri in Okrika when I begged him not to demolish a part of Okrika but (that he should) dialogue first with the people.
“After that incident, he called the chairman of Okrika (local government) and sacked him for holding a reception in our honour; that boy was the first victim.
“He also put my people on curfew for nine months. I called him and pleaded with him but he refused. Then I began to hear all sort of propaganda in the media against me; this is not the way.
“I’ve never spoken about this issue but as men of God, I believe you’ll say the truth always because there are a lot of conflicting interests; some will hear one thing and say the exact opposite.

“I also want you to know the genesis of this problem and pray that God touches Amaechi’s heart as per his hot temper because when two elephants fight, it is the grass that suffers.’’
Jonathan urged the parties involved in the crisis to help to resolve issues plaguing the state and not “whip up sentiments that will aggravate the problem.
“I appeal to Amaechi to sheathe his sword so that we can defend our state and this country with love, unity, patriotism and truth at all time.
“Hebrews 12:14 urges us to embrace peace with all men without which, we cannot see God.
“Amaechi is my son, I cannot fight him and I cannot kill him. He shouldn’t be used by outsiders against his own blood because this seat is vanity.
“One day, no matter how long it takes, we will leave this seat. Power is not forever. This seat is vanity, others sat here and left so one day I’ll also leave and we will meet at home; so why should I fight him?
“Let’s take it easy, face issues, leave non-existent matters, stop magnifying lies and respect our leaders and people in authority. Let’s give peace a chance,’’ she said.
Earlier, Bishop God-Do-Well Awomapara, Chairman, Niger Delta Bishops Forum, who led the delegation, said the visit was significant “in view of emerging situations in our region.
“We are on a quest to unravel the mysteries surrounding the Rivers issue and mediate where necessary.’’
Source: (NAN)/Vanguard

ACN Tells Police: Your Investigation Into Rivers Crisis Is One-Sided