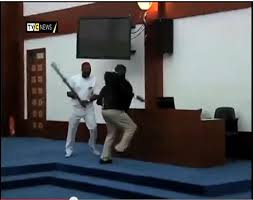 Chidi Lloyds, a member of the Rivers State House of Assembly has been declared wanted by the Police. Police Public Relations Officer of the command (PPRO), Mrs. Angela Agabe, told the News Agency of Nigeria (NAN) in Port Harcourt that Lloyd, the lawmaker representing Emohua constituency in the assembly, was wanted over alleged conspiracy, attempted murder, wounding, and willful damage.
She said that the lawmaker was last seen in the assembly on July 9, and that he failed to respond to police invitation, which she explained, elapsed on July 15.
Subscribe to our newsletter
“The Rivers State Police Command has declared wanted, one honourable Chidi Lloyd, a native of Emohua, in Emohua Local Government Area, Rivers State.
“About 37 years of age, he is the Majority Leader of the Rivers House of Assembly. He was involved in a case of conspiracy, attempted murder, wounding, and willful damage on the 9th of July 2013.
“The crime is being investigated by a special team from the Inspector-General of Police in collaboration with the state Criminal Investigation Division, Rivers command.