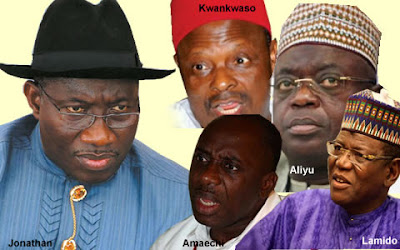 More facts have emerged on  the Sunday night meeting between  President Goodluck Jonathan and aggrieved  governors in the New Peoples Democratic Party.
Presidency sources made this known just as Jonathan met behind closed doors with some PDP governors loyal to the Bamanga Tukur-led National Working Committee of the party.
Subscribe to our newsletter
One of the sources at the Sunday meeting, said that the President and the other attendees discussed and agreed on five contentious issues: Amaechi’s suspension by the Tukur-led NWC;  control of the PDP structure at the state level; Jonathan’s alleged 2015 ambition; Tukur’s fate  and court cases.
On Amaechi, the parties agreed that  he should be recalled and that a committee be constituted to  visit Port Harcourt and reconcile all aggrieved members of the PDP in the state.
The governor  was suspended on June 21   for his alleged refusal to “obey the lawful directive of the Rivers State Executive Committee to rescind his decision dissolving the elected Executive Council of Obiokpor Local Government Area of  the state.”
The meeting also accepted that all the governors of the party, including the aggrieved ones, should be in  charge of the State Working Committees of the party in their respective states.
It was  further  learnt that since the governors  were to be in charge of the party structures  in their states, President Jonathan  should  determine the fate of  Tukur, who all  the aggrieved  governors want removed.
Our source said that  “the President argued that since it had been accepted that he  should  not interfere in the running of the party at the state level, he should be allowed to determine what would happen to its national chairman  (Tukur).”
He added that the meeting, which was also attended by three pro-Tukur governors – Godswill Akpabio(Akwa Ibom), Idris Wada(Kogi) and Liyel Imoke (Cross River State) –  agreed that all pending court cases concerning the party must  be withdrawn immediately.
Amaechi is therefore expected to withdraw a case  in which he is challenging his suspension. Also, numerous  cases filed by members of the New PDP and  the Tukur-led PDP  will  also be discontinued.
It was gathered that  Jonathan’s  2015 ambition,generated heated arguments as the aggrieved governors insisted that he had told them  that he  would not  run for a second term.
According to our source,  the President argued that there was no time he told anyone that he would not contest for second term.
The PUNCH gathered that Jonathan specifically accused one of the aggrived governors, Babangida Aliyu of Niger State, of misleading Nigerians on the 2015 debate.
Aliyu was said  to have told the President he had said at different fora that he was not going to seek re-election.
“The governor listed Ethiopia, United States and different caucus meetings of the party where the President  made the statements,”  our  source added.
When argument  on the issue raged,the Chairman of the Board of Trustees of the PDP , Chief Tony Anenih,  who was  also present at the meeting,which was held at the Presidential Villa in Abuja,  interjected and  advised  that  it should be suspended for a latter date.
The source said, “It was a give and take meeting, but at the end of the day, we agreed that the issue of 2015 should be revisited and resolved amicably.
“I can tell you that the meeting was very frank . We all spoke our minds, including the President and his deputy (Namadi Sambo). So, we wait to see the implementation of the resolutions reached.”

The  other aggrieved governors, who were also pillars of  the New PDP at the meeting were Amaechi (Rivers), Rabiu Kwankwanso (Kano), Murtala Nyaho (Adamawa), Sule Lamido (Jigawa), and  Abdulfatah Ahmed (Kwara).
A statement read by Aliyu at the end of the talks stated that the  parties agreed to avoid inflammatory remarks, pending the final resolution  of the crisis.
The statement added that further talks would continue on October 7.
On Monday Jonathan held secret talks with Wada, Benue State Governor Gabriel Suswam and other PDP governors loyal to Tukur at the Presidential Villa.
The identitities of the other governors were not known as they arrived in the Villa in vehicles with security number plates.
A source in the Villa described the meeting as  “consultative.”
Earlier on Monday,  Akpabio  and Anenih  were also sighted in the  Villa. Commenting on the outcome of the meeting, the National Publicity Secretary of the party, Chief Olisa Metuh,  said the leadership of the PDP was happy that the problems bedevilling the  party were being resolved.
Metuh said, “We are very happy and grateful  to the President, former President Olusegun Obasanjo, the chairman of BoT and other elders of the party.
“We are also happy with our governors. We are happy that the  party has shown that it is capable of resolving its crises.”
In spite of the ‘no inflammatory  comment order’, the Special Adviser to the President on Political Affairs, Mr. Ahmed  Gulak,    boasted on Monday that nobody could intimidate the President into not contesting in  2015.
“The  1999 Constitution  gives Mr. President the right to offer himself for second term if he so chooses and no individual or group can abridge his constitutional right. If he decides not to contest, let it be on his own volition not because he is intimidated or cajoled into doing that, ” he told State House correspondents in Abuja.
Gulak, who  added that peace was gradually returning to the party,  said that  Tukur  would survive the crises.
He said,   “The national chairman has no problem. He was elected and I always say that as there are processes for election, there are processes for removal or resignation. So nobody can cajole anybody to say the national chairman will not survive. Nobody is against the national chairman.”
The Presidential aide dismissed claims that the crisis would mark the end of the ruling party, saying it (PDP) has internal mechanism for resolving its problems
“We have entered into dialogue. Peace is gradually returning to the PDP in accordance with the constitution of the party and in accordance with the constitution of the Federal Republic of Nigeria. These two documents are our guides. We abide by them and we dialogue in accordance with the provision of the constitution,” he said.
Gulak  explained that the President would consider the demands of the aggrieved governors based on the constitution
He  also said that the President would never ask the Economic and Financial Crimes Commission not to perform its duties.
Source: Punch

Atiku Condemns The Action Of The Police On Governor Rotimi Amaechi