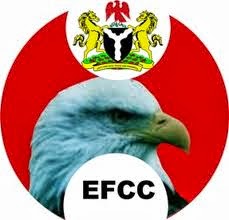 The attention of the Economic and Financial Crimes Commission has been drawn to publications in Vanguard and The Punch, newspapers and some online publications of Monday, 10 March, 2014, entitled,Alam’s Loot: Bayelsa Govt. Drags EFCC to Court, and Bayelsa Drags EFCC to Court over Alamieyeseigha Loot among other headlines.
The news reports about a matter said to have been filed at the Federal High Court, Abuja, by one Mr. George Uboh, ostensibly acting on the instruction of the Bayelsa State Government, is provocative misinformation and very cheap blackmail, to say the very least.
Subscribe to our newsletter
The Commission wishes to state that it has not been served a copy of the purported processes and therefore cannot comment on a matter, which to all intent and purpose, does not have any known existence beyond the media reports.  However, if and when the Commission is served, EFCC will give an adequate legal response.

It is however instructive that a matter as serious as its originators would have the world believe, is given to reporters without serving the respondents.
That said, the Commission seriously doubts that the Bayelsa State Government instructed the said Mr. George Uboh to act on its behalf, contrary to the claim of the busybody.  If however they did, then it is most unfortunate, because the highly defamatory allegations he has made ostensibly on their behalf cannot and will not shield Bayelsa State Government and it officials from ongoing investigations.  If the goal of the purveyors of the reports was to make EFCC stop or soft-pedal in its intensive and extensive investigation of Bayelsa State Government and its officials, they failed woefully.
While the publications and the motive behind them are highly suspicious, it is also pertinent to point out that the allegations made therein are very wide, wild and unacceptable.  The clearly noxious allegations that the Commission is not only holding on to recovered funds of the Bayelsa State Government but also“trading with the funds by way of funds placement/fixed deposits” could only have been calculated to impugn the hard-earned credibility of the EFCC.
Let it be known that the sensational allegations, wild accusations and imputations contained in the scandalous reports strike at the very heart of EFCC’s values and rules of engagement and WILL NOT be allowed to go unanswered.  Those pushing this deliberate misinformation for whatever ends should therefore prepare to substantiate them.