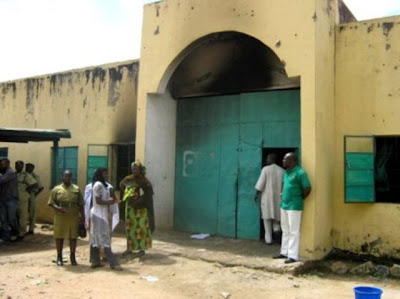 Protest broke out at the Kuje Prisons near Abuja   on Thursday over alleged preferential treatment of three Lebanese inmates by officials of the  facility.
The protest took place just as the  Defence Headquarters said that over 1,000 suspected members of the Islamist militant group, Boko Haram,  were   in  detention facilities in the country.
The Lebanese prisoners – Mustapha Fawaz, Abdallah Thahani and Talal Ahmed Rodo – believed to be  members of an  international terrorist group, Hezbollah,  were said to have been allowed to use a particular area of the prison ground for the Eid-fitri prayers while other inmates,  including Boko Haram suspects,  were restricted to another place.
Subscribe to our newsletter
The Lebanese  are standing trial  at a Federal High Court, Abuja, for terrorism and illegal importation of firearms.
The protesting inmates   destroyed some amenities, including water pipes,  electric cables and cell windows.
A source told one of  our correspondents that the angry inmates also splashed water on some of the prison officials  who ran  for their  safety.
A Boko Haram inmate serving a  life sentence was said to have  fainted during the melee.
Our  source said, “The tension was brought under control by the Deputy Comptroller-General in charge of Operations, Mr. Segun Bewaji,  who attended  to  the convict that fainted.  But the inmates in the single cells were restive and refused to be pacified by the DCG.”
The  Lebanese suspects were moved to the prison on August 2, 2013 based on an application by their lawyer, Ahmed Raji(SAN), who claimed that  they were no longer comfortable in the custody of the State Security Service.
The court had granted the application and the suspects were promptly transferred to Kuje Prisons.
When contacted, the Prisons Public Relations Officer, Ope Fatinikun, claimed  that the protest  had nothing to do with the Lebanese inmates.
He added that it was caused by two groups struggling to use a particular place for the Eid-fitri worship.
“I don’t want to give anybody names, but the incident was caused by two groups (of inmates) who wanted to use a particular place for their  prayers;  but the situation has been brought under control. We talked to them and they  saw  reason with us, “he said.
Also on Thursday, the Director of Defence Information, Brig.-Gen. Chris Olukolade said at a news conference   in Abuja that  “ over 1,000 of the Boko Haram insurgents  were arrested  in the process of engagement with weapons in their hands and they are being detained.”
He also said that some of the members of the sect had  been killed in action.
He was   silent on the casualty figure on the side of the Military Joint Task Force  since  emergency rule  was declared in  Borno, Yobe and Adamawa states.

Olukolade,  who justified the  state of emergency  in the three states, said the gains of the  operations  would be clear when viewed against the backdrop  of the security situation in the  states before the exercise.
He  stated that no part of the country was under the control of the insurgents contrary to the situation that prompted  President Goodluck Jonathan to declare emergency rule in the affected states.
The Defence spokesman said that  a  large quantity of arms and ammunition  as well as raw materials for the production of Improvised Explosive Devices were  recovered from the arrested inurgents.
He  added that the drastic reduction in   bombings outside Borno, Yobe and Adamawa  was a clear reflection of the rate of success of the ongoing security operations in the  three states.
Olukolade said that  the few incidents and the attack on soft targets were  meant to send a  message   that the insurgents were still around.
He said, “The level of success is predicated on the President’s directive to stop the incident. The rate of bombings outside the three states has reduced in drastic terms. You may still see skirmishes; but   those are isolated cases  to announce that they are still around.
“Before, these people  took over government facilities and  converted them to their use. Today, we can report that that has been completely reversed;  there is no part of this country where terrorists have freedom of action.
“The special forces have also recovered large quantity of arms and ammunition from them in the Sambisa forest where they had their biggest operational base.”
Meanwhile, the Presidential Committee on Dialogue and Peaceful Resolution of the Security Challenges in the North has  said it will  intensify discussions with  the Boko Haram Sect.
The Chairman of the committee and Minister of Special Duties and Inter-governmental Affairs, Alhaji Tanimu Turaki (SAN),  gave the assurance in his Sallah message  on Thursday in Abuja.
He said in a statement by his Special Assistant on Media,  Mr. Okey Muogbo,   that   more insurgents were expected to accept the dialogue option.
Turaki said,  “The business of ensuring that we have a more peaceful and secure society is our collective responsibility  and I pray that God will guide and assist us in this Herculean task which my committee has been charged to bring to a successful end.”
According to him,   members of  the amnesty committee  are aware of the enormous challenges in the dialogue process. He added that as patriotic Nigerians, “we  are fully committed to discharging the duty of ensuring that peace returns  to the North and by extension,  to the whole country.”
He urged  insurgent group  members   who had not yet accepted dialogue to use the occasion of the Sallah to “irrevocably accept the dialogue option offered by the Federal Government and come to the negotiating table to air their grievances and discuss a peaceful end to the crisis in the North.”
“The search for a permanent solution to the security challenges in the North requires the efforts and commitment of all Nigerians”, Turaki stated.
Source: Punch