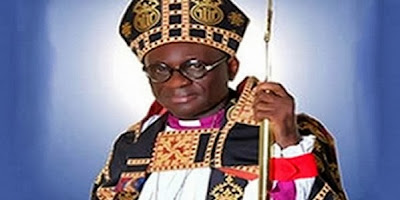 Subscribe to our newsletter
The Archbishop of the Niger Delta Province, Most Reverend Ignatius Kattey, has described the Rivers State police command’s claim that it rescued him from his abductors as a lie.
Bishop Kattey, who is also the Dean of the Nigerian Anglican Communion, disclosed this on Wednesday during a press briefing at Eleme, Rivers State.
The cleric, who commended the federal and the Rivers State governments as well as security agencies in the state, however charged government to give more attention to security issues in the country.

Kattey, who said he was unaware of any ransom paid to his abductors, also said he had forgiven those who abducted him and subjected him to the harsh experiences he went through for the nine days he was a hostage.
On the claims by the police to have rescued him from his abductors, Bishop Kattey said “the police did not rescue me. They were not the ones who rescued my wife, Beatrice. I saw the police for the first time two days ago since the incident. I have heard the statements made by the Rivers PPRO. The police are telling lies. If you cannot trust the police again, then who can you trust? I told the Commissioner of Police and he has apologised.
“I know they made efforts but they did not rescue me and my wife. A helicopter flew over the area more than 500 times, but the boys (kidnappers) were smarter. They held me with them in a thick forest and no one could see me there.
On the day of my release (Saturday, Sepember14), they moved me and we trekked a number of kilometers till we got to a road. Then they gave me N200 and ordered me to walk to the direction where I could get a bike. We thank God for His mercies because I wouldn’t even wish my enemy to go through that experience,” the senior cleric said.
Describing his experience in the hands of the kidnappers, Bishop Kattey said he slept on the ground, was bitten by mosquitoes, beaten by rain, but fed daily with fast food and sometimes boli (roasted plantain).
“I was not tortured. They fed me with fast food once a day, sometimes with boli. They tied and chained my legs, but one of them said you can’t chain this man. I slept on the ground. I was beaten by rain and mosquitoes like them for up to seven days. I am an old man of 65 years. I had no choice than to stay and swim in the forest with them,” he said.
Source: Tribune