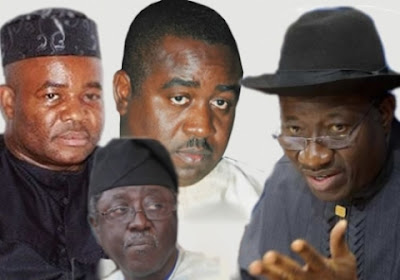 President Goodluck Jonathan last night held meeting with the governors of  the Peoples Democratic Party (PDP), but without the seven aggrieved governors:  Alhaji Murtala Nyako (Adamawa), Dr. Mu’azu Babangida Aliyu (Niger), Alhaji Abudfatah Ahmed (Kwara), Dr. Rabiu Kwankwaso (Kano), Mr. Chibuike Amaechi (Rivers), Alhaji Sule Lamido (Jigawa) and Alhaji Aliyu Wamakko (Sokoto), in a bid to find lasting solution to the crisis rocking the party which led to the emergence of splinter group.
Subscribe to our newsletter
This was after initial reports that the meeting had been cancelled.
The meeting which commenced at 9:15 pm, was held  at the First Lady’s Conference Room in the State House, Abuja. State House correspondents were barred from the venue of the meeting.

Desertherald Publisher Arrested On The Orders Of FCT Minister