PDP Calls Buhari A Failure; Insists Tinubu Is A Despot 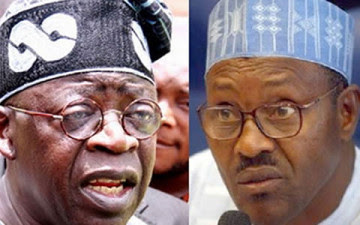 The Peoples Democratic Party, PDP, has alleged that the 2011 presidential candidate of Congress for Progressive Change, CPC, General Muhammadu Buhari, and former Governor of Lagos State, Bola Tinubu, were united in dictatorship.
The party in a strong worded press release lambasted both Buhari and Tinubu, urging Nigeria to be wary of the two politicians and their antics.
Subscribe to our newsletter
In a statement signed yesterday by its Acting National Publicity Secretary, Mr Tony Okeke, the party said: “Buhari and Tinubu are united in dictatorship. It is on this pedestal that they are pursuing merger to register the All Progressives Congress, which manifesto betrays the fact that they have absolutely nothing to offer but desperate for power.
“We urge lovers of democracy, especially those seeking elections on the platform of any party where the duo are in control, to wake up before it is too late as there will not be any primaries to give them a level playing ground to realize their dreams.
“Nigerians should also note the antecedents of these politicians and their cronies and know that any government in which they are allowed to hold sway will be a terrible government characterized by dictatorship, corruption and abuse of the rights of Nigerians.
“The ruling party took stock of activities of the two men and submitted that they are bitter because they know that they will lose the 2015 general election, despite the so called merger of their parties, which is built on deceit, corruption and falsehood and as such want to invent excuses ahead of time.
“Buhari and Tinubu lack the moral justification to pontificate on democracy, especially when all their actions are dictatorial.
“The CPC in castigating Buhari’s former aide, Yinka Odumakin, for exposing atrocities of the CPC leader and those of ACN officials in a recent statement shows the CPC as a party characterized by falsehood.
“Buhari has refused to change his dictatorial tendencies. He has continued to impose himself as leader of any political party where he finds himself and uses his powers to handpick candidates for elections.
“In 2003, he forced John Nwodo Jr. and other presidential candidates in the then APP to step down for him”.
leading to the famous I weep for Nigeria statement by Nwodo. In 2003, Buhari imposed himself and failed. In 2007 and 201,1 he imposed himself and failed. If he imposes himself and his lackey Tinubu or Tinubu’s wife as running-mate in 2015, he will also fail.”

The PDP further described Tinubu as an arrogant man lacking in democratic credentials, who takes pride in claiming the title of “a hero of democracy.”
“Tinubu has been going around making statements to portray himself as a hero of democracy from which imaginary pedestal he continues to vilify and accuse the PDP of working against Nigeria’s democracy.
“It is to, say the least, rather pathetic that the opposition leader has failed to realize that Nigerians have since become fully aware of his double-facedness as he has continued to exhibit crass dictatorship in the leadership of the ACN and states controlled by the ACN through which he has continued to syphon the resources of the states.
“It is on record that the so called democrat crowned himself the national leader of the ACN without recourse to appropriate democratic process. It is also on record that Tinubu forced the former Speaker of Lagos State House of Assembly, Senator Olorunnimbe Mamora, to leave the Senate, despite his enviable performance, only to replace him with his wife, Senator Oluremi Tinubu, who has made no meaningful contribution since she got to the Senate more than two years ago, thereby depriving the good people of Lagos State effective representation in the Senate.
“Nigerians have not forgotten how Tinubu recently imposed his daughter, Mrs. Folashade Tinubu-Ojo, who is not a full-time trader to replace his late mother, Abibatu Mogaji, as President-General of the Association of Nigerian Market Women and Men.
“Tinubu may wish to be reminded how he used his dictatorial powers to install his son in-law, Oyetunde Oladimeji Ojo, as a member representing Ijero/Efon/Ekiti West of Ekiti State in the House of Representatives while his daughter was imposed as a member of Lagos State House of Assembly.
“It is still fresh in the minds of Nigerians that Tinubu recently tried to bar a member of the House of Representatives, Bamidele Opeyemi, from contesting the 2014 governorship election in Ekiti State, a despotic act which was widely condemned across the country.
“Nigerians have not forgotten that the same man who now parades himself as a champion of democracy ran away at the heat of the military dictatorship, leaving the struggle for acclaimed statesmen such as Pa. Abraham Adesanya, Chief Gani Fawehinmi, Dr. Alex Ekwueme, among others, just to return at the end of the struggle to wangle his way to become governor of Lagos State.”
Source: Daily Post