Only 4 Ministers May Survive Cabinet Shake-up 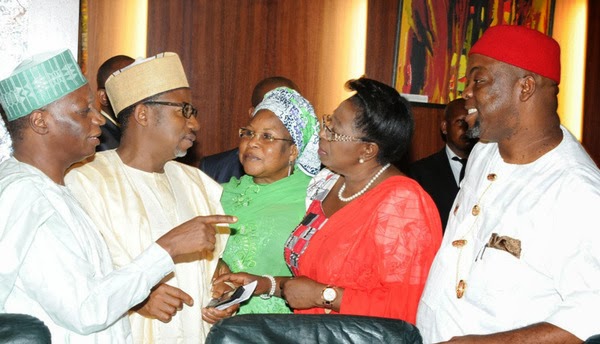 Less than five days before the Senate receives the ministerial list, there are strong indications that President Goodluck Jonathan will make sweeping changes in the federal cabinet.
In the impending cabinet shake-up that will affect even special advisers and some influential presidential aides, not more than four ministers are likely to survive what an impeccable source called “a timely exercise”.
Subscribe to our newsletter
Those who are likely to remain as ministers are: Mrs Diezani Alison-Madueke (petroleum), Dr Ngozi Okonjo-Iweala (finance and coordinating minister for the economy), Dr Akinwunmi Adesina (agriculture), and Mr Labaran Maku (information and overseer of the defence ministry).
Even though most of those to be appointed are likely to be politicians with “effective mobilisation drive”, it was gathered that former national security adviser (NSA) Gen. Aliyu Mohammed Gusau is touted to become the next defence minister. But his acceptance to serve in President Jonathan’s cabinet came after months of pressure from the presidency.
The ministers to be shown the way out will include those with governorship ambitions.
It is expected that the Federal Executive Council meeting for this week will be a valedictory session during which the president will announce the partial dissolution of the cabinet.
President Jonathan had, while playing host to the north-west caucus of the PDP, hinted that he would forward lists of ministerial nominees to the National Assembly when it resumed this week.
The nominees were meant to fill the 12 vacancies created when ministers were dropped in a minor cabinet shake-up about seven months ago.
But a source last night informed LEADERSHIP Sunday that the president has decided to go the whole hog and drop the ministers with the exception of only four.

According to the source, the decision for a major cabinet reshuffle was the reason for the delay in naming replacements for the nine sacked ministers and the three existing vacancies occasioned by the dropping of Mohammed Haliru Bello as minister of defence and Inuwa Abdulkadir as minister of youth development, as well as the resignation of Dr Ali Pate as minister of state for health.
The source further disclosed that President Jonathan has decided to drop most of the ministers to enable some of them that are nursing political ambitions to go and pursue same in their states.
“President Jonathan would not want to go to the Senate in piecemeal. What it means is that he would want to submit a holistic list of nominees that will serve the tenure with him in 2015 to the Senate.
“He came to that decision immediately after he dropped the nine ministers last time. So probably he will announce the shake-up on Wednesday with the list hitting the Senate same day. It is to avoid unnecessary lobbying.
“The issue is beyond who is close to the president and who is not; what is most important is that the man has made up his mind to make changes not only at the level of the ministers but along all strata of the presidency, including special advisers, assistants and others.
“I can tell you that this will be last cabinet shake-up because it is not envisaged that the president will do same after now, because this is election year and it is a timely exercise,” the source said.
It was also gathered last night that the president may shake up his office. In the process, his chief of staff may be affected. The president is said to be gunning for a northerner well-drenched in the politics of the region.
The plan for a major cabinet shake-up has lingered for some time now, but sources informed that President Jonathan has come to a point where it has become expedient to drop most of the ministers for pure political consideration.
Source: Leadership