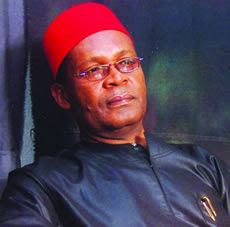 Following Thursday’s online news reports concerning Ohaneze Ndigbo leadership reaction over Lagos deportation saga, the spokesman of defunct ACN and head of Lagos State Infrastructure Maintenance & Regulatory Agency (LASIMRA), Joe Igbokwe, in another reaction received via e-mail believes that Ohaneze is thinking strategically. Hear him.
From Joe Igbokwe
I do not want to join issues with all those who have rendered a veritable tool Oyibo people invented to help humanity almost nugatory by engaging into tribal verbal wars here. Over the years I have watched these foolish engagements by people sufficiently educated to know better but have chosen to play Ostrich.
Subscribe to our newsletter
Igbo must think about Strategic interest always. People that were taken to the North are less human, those taken South West are less human, those taken to Ebonyi and Akwalbom in 2011 by Gov Obi are less human abi?  nkem di iche bu ajo aha. Honest intellectuals in Igboland must pull the rug away from some people who create enemies for Ndigbo in this forum at the drop of a hat. The crippled cannot be the akwaa akwulu Ndigbo. The blind cannot be the anya Ndigbo ji ahu uzo in Nigeria. Half baked educated people cannot speak for Ndigbo. The nonsensical effusions going on here in the name of the so- called deportation in Lagos is a misnomer, an aberration, reprehensible and a basket case. A man going to the market to buy basket knows that he is not going to use it to store water. The man selling the basket knows also that the buyer cannot use it to store water. A word is enough for the wise . Ohaneze is thinking. Ohaneze understands the game. Ohaneze can get it. Case rested!-Joe Igbokwe
Below is the earlier report of Ohaneze Stance on Deportation of Igbos
Ohaneze Urges Restraint over Deportation of Igbos-Describes Yorubas as Allies
Ohaneze Ndgbo have urged for restraint in the responses from Igbos over the issue of their deported sons and daughters on the orders of Lagos State Government. The group also called for restraint in the ongoing Igbos-Yoruba hate comments to avoid unnecessary tension in the polity. This was stated by the Secretary General of Ohanaeze Ndigbo, Dr Joe Nwaorgu during a briefing with group of clergymen led by Rev Obinna Akukwe who sought clarification on the crisis ridden state of Ndigbo at Enugu, yesterday.

The Ohaneze leader said that he had spoken personally with Governor Fashola over the issue and heard the other side of the story. Dr Nwaorgu also informed the clergymen that the President of Igbo Community in Lagos, Prof Anya .O. Anya was earlier instructed to get in touch with Fashola over the issue and that the Governor personally drove to Anya’s house where he clarified with them on the issue.  Describing the deportation of anybody in Nigeria, not just Igbos, as morally unjustifiable and legally wrong, he said that destitutes should be rehabilitated instead and not dehumanized. He said that Igbos and Yorubas are not at war and advised against hateful incitements by attention seeking politicians from both sides.
The Ohanaeze leader also said that the body had not authorized anybody to speak on its behalf concerning 2015 presidential elections and revealed that the decision on who to support will be taken on the last day of the 2013 Igbo Day Celebrations scheduled for September 24-27th. He discountenanced reports in a newspaper last Sunday that Ohaneze was part of an earlier summit insisting on Igbo presidency and said that options are still open to Ndigbo.
In the same vein the Secretary of Electoral Committee in the January 12th Ohaneze controversial election Dr Mrs Felly Eneh had reiterated that there is no faction in Ohaneze. The woman leader was making veiled references to media reports purportedly sponsored by a presidential aide that a faction of Ohaneze Ndigbo met at Enugu last Saturday, said that”the election of January 12th was legally conducted and those who think otherwise are minority irritants and entitled to their opinion, people are just being sponsored to create confusion”. She condemned the killing of Igbos in Kano and asked government to do proper investigation.
The Assistant National Publicity Secretary of Ohanaeze and  gubernatorial aspirant in Anambra State , Barrister Emejulu Okpalaukwu in his reaction explained  that Ohanaeze leadership is engaging the presidency for more security for Igbos especially in Kano and expressed confidence that the quiet diplomacy of the Ohanaeze President General, Chief Nnachi Igariwey would yield tangible results.
Ohaneze leadership had earlier expressed angst that its Kano State Branch President, Chief Tobias Idika is being hunted by Kano State Government and Police Command and warned against any further harassment of the Chapter President. They, however, asked Chief Idika not to make any further public statements on the Kano issue, promising to engage the presidency quietly over the state of Ndigbo in Kano.
The Ime-Obi Ohaneze met last Saturday at Ohaneze Headquarters, Enugu and discussed wide range of issues affecting Igboland. The group, among other issues opposed the grazing bill before the National Assembly and cautioned against ethnicization of the Onitsha head bridge deportation saga. Ohaneze also prohibited state chapters of the group from issuing press statements on national issues without clearance from the national secretariat.
The highly attended Ime-Obi meeting had the presence of Chief Nnachi Igariwey (President General), Dr Joe Nwaorgu( Secretary General)  Eze Justice Ozobu ( Past President) , Eze Cletus Ilomuanya( Chairman South East Council of Traditional Rulers), Eze Desmond Ogugua ( Eze of Mbaise), Eze Gibson Nwosu( Ezeuzu of Awka), Eze Njemanze,Dr Dozie Ikedife(Past President),Chief Mbazulike Amechi, Rev Obinna Akukwe,Senator Hope Uzodimma, Prof ABC Nwosu, Eze Ben Nwosu , Barrister Emejulu Okpalaukwu, Nze Mark Odu, Prof S.E Asogwa, among numerous Igbo leaders in attendance.