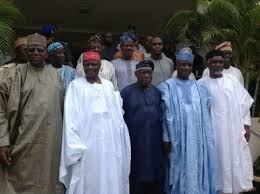 There are growing indications that former president Olusegun Obasnajo has directed the aggrieved governors of the People’s Democratic Party (PDP) to forget any plot to dump the ruling party, just as the opposition All Progressives Congress is said to be in shock over failure of its initial efforts to get some PDP governors to defect from the ruling party.
An impeccable source close to the Otta farmer revealed to the Saturday Tribune that the former president passed the message through one of the aggrieved governors during the recent birthday celebration of Chief Tony Anenih in Abuja, warning that the solution to their grievances is not in quitting the party.
The former Nigerian leader, whose presence at the birthday reportedly excited the presidential family, was quoted as telling one of the governors at the event that APC was not an option, urging them to “explore all internal remedies, and if necessary, fight from within.”
The rebel governors had visited many former leaders with widespread reports that they were preparing grounds for defection from the PDP. Even when the governors denied the plot, the opposition All Progressive Congress (APC) boasted of their imminent defection.
It was, however, gathered through the source that the directive to the aggrieved governors and others did not signify that he had endorsed President Goodluck Jonathan; rather the source hinted that the retired general could be “strengthening a bloc within the ruling party.”
Another source close to Obasanjo in the South-West, while confirming this mindset of the former president, added that he had also impressed it on his other allies across the country to remain in the PDP.
Obasanjo was reported to have reminded all aggrieved party chiefs that the real reason behind the formation of the PDP was to safeguard the unity of the nation, insisting that PDP remained the only vehicle to sustain the unity of the country.
Saturday Tribune was told that the former leader was worried that the stories of defection were linked to him, especially after the visitation of the five governors.
It would be recalled that Chief Obasnajo was responsible for the nomination by the PDP of the governors involved in the nationwide consultation which the Presidency considered hostile but which the governors called Save Democracy Campaign.
Meanwhile, the opposition APC is said to be worried about the failure of any real big figure within the PDP to defecting to the opposition party almost two weeks after its registration by the Independent National Electoral Commission (INEC).
The interim National Publicity Secretary of the APC, Alhaji Lai Moahmmed, had sometime ago boasted that nine PDP governors had indicated interest in joining the new party once it was registered. Even the Rivers State governor, Rotimi Amaechi, who romanced with the opposition party for sometime is said to have withdrawn because of the larger implication on himself and his political future.

Amaechi has now publicly denied any plan to dump the PDP, while the opposition has even lost two-term former governors Jolly Nyame of Taraba State and Bonnie Haruna of Adamawa State to the ruling party.
Governor Sule Lamido of Jigawa, some days ago in a media interview, was very clear about the aggrieved governors’ perception of APC. He said in that interview of APC: “I’m highly amused. Do you know what they call self-wish?
“These are local propaganda which is terribly elementary. When you look at the party called PDP, I’ve been saying it since 1999- 14 years in 2013- it is PDP only that has remained. AD had gone from AD into AC, into ACN, into something else and now going to APC. APP had gone into ANPP and then, later on they are going to something. They are going to APC. Now, CPC is a one-man party. It is not so lost out on us of some parties that see Buhari as their industry. So they hang unto him and because he is very naïve, he thinks they are serious.
“I have been wondering; they abused the PDP that we are murderers, party of riggers, a party of whatever – it is evil. Fine! Why do they want murderer governors in their midst? Why do they want us to be there? Number two, this so-called APC is again what you call ‘political fraud’ because you may change the nomenclature – change it 10 times over – did the people come from heaven?
“They are the same old people. You see, to me, I laugh at it more because the entire contraption is a creation of pain and anger. It is not about Nigeria. They are people who failed to make it in their political parties who think by coming together they can make it.
“If you input one PDP governor in APC, they will collapse. It will collapse. You don’t simply say because of some misunderstanding and destroy yourself. The PDP has attained a level in Nigeria. ‘Renegade governors’, yes, whatever they call us. Today, who is there in PDP who is older than me in the party that I should leave the party for? Who is that person? So, there is no way you will say because there is heat wave in your house, you leave your house. Where would you go? To someone else’s house? I laugh; to do what?”
Alhaji Mohammed, the APC spokesman could not be reached for his comments on the development.
Governors meet in Saudi Arabia
Meanwhile, notable governors from the PDP currently on lesser hajj (umrah) in Saudi Arabia are said to have held several meetings in the holy land on whether or not to remain in the party.
A source told Saturday Tribune that the governors were unanimous in their opinion that President Goodluck Jonathan had been unfair to them for supporting the national chairman of the party, Alhaji Bamanga Tukur, and refusing to recognise the River State governor, Mr Rotimi Amaechi, as the chairman of the Nigeria Governors Forum (NGF).
According to the source, who claimed to have witnessed some of these meetings, most of the said PDP governors are from the North-West and North-Central. But the source added that those of them (governors) who are currently in their second term called for caution, saying that, for the sake of those still eyeing a second term, it would be risky for them to openly work against the establishment by identifying with the All Progressives Congress (APC).
They were said to have arrived at a consensus that it would be suicidal, politically, for them to openly support APC, as this might make them make the same mistake former Vice President Atiku Abubakar made when he defected to the defunct Action Congress of Nigeria (CAN), on the platform of which he contested and lost the 2007 presidential election.
The APC, they reasoned, was formed as a marriage of convenience and which would probably disintegrate when it is time to pick its major candidates, especially its presidential flag bearer.
“Their impression is that it is better for them to be loyal to certainty than to go for uncertainty. Most of them believed that it would amount to wrong political calculation for them to believe that the new party would have a huge following in the South, citing the 2011 presidential election, where the presidential candidate of the ACN, Nuhu Ribadu, lost the presidential election woefully in the South-West,” the source said.
Source: Tribune

We Have At Least 23 Governors Coming To APC.