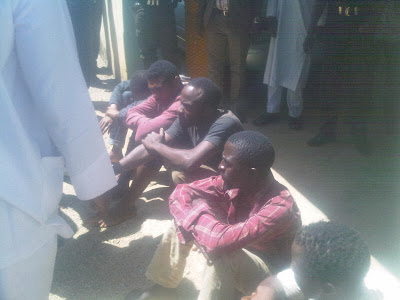 The Plateau State Police Command continuous putting of its eagle eyes on the increasing number of raped and other social vices has continued too yield results this is as the men and officers of the Plateau State Command of the Nigerian Police, arrested one Abdullahi Adams aged 31 who raped a 7 year-old Halima Saidu to coma. Adams invited her into his bedroom tied her hands and gaged her mouth with hand by committing crime that left injuries all over the private part
The police commissioner CP Chris Olakpe disclosed this at the police headquarters while parading syndicate of rape and causing hurt of 14 year-old Miss Evelyn Ezekiel by Emmanuel Bala a native doctor in RIM village of Riyom LGA.
Subscribe to our newsletter
The victim who is undergoing treatment as a result of HIV/AIDS revealed that the Native Doctor since August this year kept her as sex object by having frequent sexual intercourse with her making her to believe that sex is part of the treatment.
However, as the secret of their  illicit affairs with the native doctor  continue without yielding any positive  result miss Evelyn Ezekiel drew the wife attention which led to hurt misunderstanding,  the native doctor descended heavily on the girl by beating her in the process wounded her and she was hospitalized.
The commissioner warned parents to protect their children especially the girl child as there are many wolves in our society now seeking for innocent girls to destroy.
Olakpe also sound a note of warning that gone are the days when victims of cases of rape are reluctant in seeking for justice.
Chris Olakpe added that the team of CID department also recorded another breakthrough when a 9 years Miss Christina Danlami was rape six able men ;Richard John,Zere Adams,Ugochukwu Raphael,Sok Davou and Emmanuel Ibrahim on the 4th ,Oct 2013 .
After thoroughly investigation by the Nigerian Police the suspects , Richard John ,Zere Adams and Hamza Musa confessed to have committed crime while on the same date Ugochukwu Raphael,Emmanuel Ibrahim and Sok Davou also rape her on separate places.
Speaking with our correspondent Mr Richard John denied knowledge of having sex with the little girl.

He said since one week ago before this  incident happen I have been on admission at the hospital when the doctors discharge me I came back home only to findout about the death of a close friend Dadi .
While on my way back I got a message that the police want to see me so I  went straight to Laranto Police station on arrival they arrested me and started hitting me  that I should confuse but I pleaded with them that I’m not  having the knowledge of what is going on yet they refused until today that I’m been paraded before newsmen.
Meanwhile afresh incident happened in a hotel in Jos husband Catches His Pregnant Wife in Hotel Room with another Man, shares incriminating Photos on the Internet.
According to reports, a husband who suspected his wife of infidelity has caught her red-handed in the arms of another man.
Sources revealed that the woman, who is already a few months pregnant, has been seeing her lover and having extra-marital affairs with him for a while now.
The husband has reportedly been hearing the rumours of his wife’s affair and decided to take action.
On this fateful day, the wife and her lover, met at their usual location (a hotel) to have their lovemaking session.
The husband, at this time, got a call from his informant. He then busted into the hotel room and caught his pregnant wife in the act.
The husband reportedly took photos and started distributing them and the matter is still under investigation by the Plateau state command.